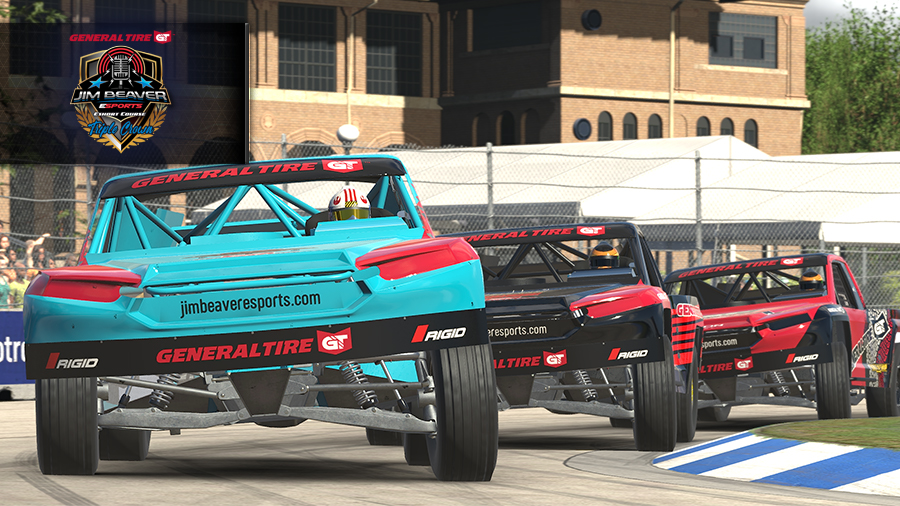 The General Tire eShort Course Triple Crown, Jim Beaver eSports’ premier three-race series of off-road iRacing events, continues with its annual Pro 2 race, this time heading to the streets of Detroit Belle Isle. The action will make its US television debut on Friday, March 4 at 8PM PT/11PM ET on the CBS Sports Network, with encore airings set for March 5 at 8AM ET and March 9 at 10:30AM ET.

The Pro 2-only round of the eShort Course Triple Crown has always been unique for its placement on a road course, first competing on WeatherTech Raceway Laguna Seca in 2020 and taking on Lime Rock Park last year. Jim Beaver eSports member and former iRacing World of Outlaws Late Model Pro Series driver Brandyn Proudfoot has been the dominant driver in the format, winning both of those races as well as a standalone event on the streets of Long Beach at the end of 2020.

But the field opens up with a greater list of entries in Detroit, with a trio of eNASCAR Coca-Cola iRacing Series drivers on the entry list. Joining JBeS’ own Blake Reynolds, who represents the team in eNASCAR and returns after making his debut in the World Cup, are a pair of Stewart-Haas eSports entries for eNASCAR mainstays Steven Wilson and Dylan Duval. They’ll join top entries from other off-road focused sim racing squads like Factory Simsport and Team Watson Racing as part of a battle for supremacy on the streets.

Following Detroit, the General Tire eShort Course Triple Crown concludes with its annual Pro 4 event at Crandon International Raceway, and by far the biggest grid of the season with over 50 entries. Racers joining the grid for Crandon include action sports legend Travis Pastrana, NFL all-pro Kyle Long, Nitro Circus’ Jim DeChamp, eNASCAR driver Cody Byus and many others. As with the rest of the Triple Crown, the Pro 4 action at Crandon will also air on the CBS Sports Network, with an air date set to be announced later this month.