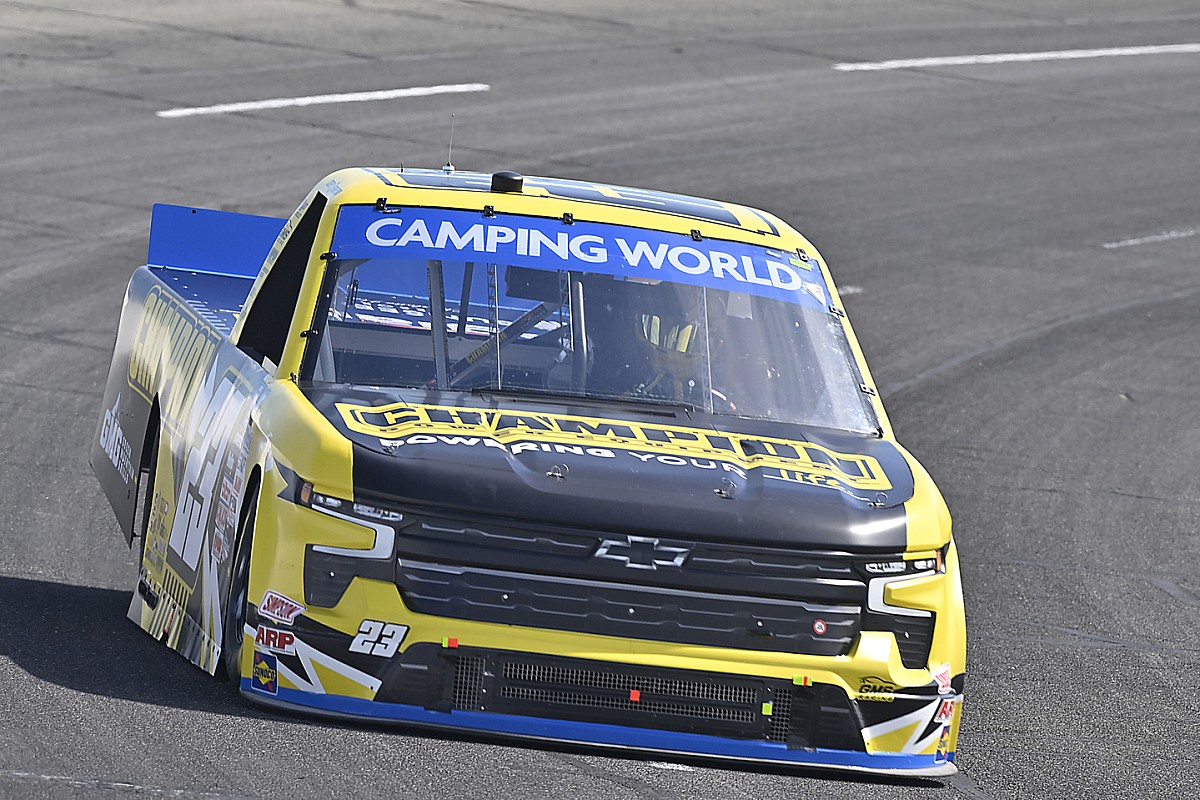 Enfinger was among several trucks that pit for new tires under a late race caution and he had made his way up to fourth when the race went into overtime.

John Hunter Nemechek led on the restart but was quickly passed by Zane Smith but Enfinger moved past them both at the start of the final lap and held off Ben Rhodes by 0.477 seconds to seal the win.

With the victory, Enfinger automatically advances to Round 2 of the playoffs regardless of his performance in the next two races. The win is the seventh of his career.

“We’re finally moving forward. This is the first laps we’ve led since Atlanta or something like that,” Enfinger said. “We’ve been terrible all season. We’ve just been off a little bit as an organization.

“We’ve been working so hard because we’ve been sucking. It hurts to say it, but we have had a terrible season to this point. But we had a great No. 23 Chevy all night. I felt like every time we got the lead, a caution came out.

Following the break between Stages 2 and 3, only a handful of trucks elected to pit. Majeski remained on the track and in the lead when the race returned to green on Lap 129.

NASCAR displayed a caution on Lap 140 for debris on the track. Majeski remained in the lead on the restart on Lap 146.

Zane Smith was involved in a wreck with Lawless Alan on Lap 148 as the field raced four-wide.

Most of the lead-lap trucks remained on the track. Majeski continued to lead on the restart on Lap 159 followed by Enfinger and Nemechek.

With 30 laps remaining, Majeski had opened up a 1.7-second lead over Enfinger as Nemechek ran third and Friesen fourth.

With 15 laps to go, Enfinger closed to within 1.3 seconds of Majeski but was making little progress against the race leader.

After the two ran up on some lapped traffic, Enfinger caught Majeski and reclaimed the lead on Lap 189.

Colby Howard wrecked on Lap 191 after contact with Hocevar in Turn 1 to bring out the ninth caution of the race.

Most of the lead-lap trucks pit with Majeski the first off pit road. Nemechek and nine others elected to stay out.

The race resumed with two laps to go with Nemechek in the lead followed by Taylor Gray, Ankrum and Zane Smith. Majeski lined up 11th.

Gray grabbed the lead on the restart and Nemechek wrecked Gray which brought out a caution with one lap remaining. Nemechek was scored as the leader as the race went into overtime.

Majeski took the Stage 2 win as caution was displayed on the final lap for a spin by Dean Thompson.

Following the break between Stages 1 and 2, the lead-lap trucks all pit with Chandler Smith the first off pit road. Rhodes was penalized for speeding on pit road and had to restart from the rear of the field.

On the restart on Lap 71, Chandler Smith was followed by Hocevar and Nemechek.

Hocevar quickly powered by Smith on the restart and took the lead for the first time in the race.

NASCAR displayed a caution on Lap 74 after Blake Lothian’s truck stalled on the track.

With 25 laps remaining in the stage, Hocevar and Enfinger were involved in a side-by-side battle for the lead as Nemechek remained close behind in third.

On Lap 105, Enfinger’s patience finally paid off as he got around Hocevar to take the lead for the first time. Lapped traffic appear to impede Hocevar’s progress.

Nemechek spun on Lap 107 in Turn 4 and made contact with Kris Wright to bring out the fifth caution of the race.

Most of the lead-lap trucks pit but Chandler Smith remained on the track and inherited the lead. Enfinger was first off pit road of those who pit.

Smith led the way on the restart on Lap 115, followed by Rhodes and Kaz Grala. Enfinger lined up sixth.

Majeski got around Chandler Smith on Lap 117 to take the lead as Enfinger moved into second on new tires.

Nemechek held off a late charge from Chandler Smith to take the Stage 1 win, his fourth stage victory of the 2022 season.

Hocevar was third, Friesen fourth and Enfinger completed the top-five.

Nemechek started on the pole and took command of the race early until a caution was displayed on Lap 10 for a wreck involving Spencer Boyd and Josh Reaume in Turn 1.

Only a handful of trucks pit and Nemechek remained the leader on the restart on Lap 21.

On Lap 30, Reaume again spun out to bring out another caution. Most of the lead-lap trucks stayed out but Crafton did pit.

Nemechek remained out front on the restart on Lap 38.

With 10 laps remaining in the first stage, Nemechek’s lead over Chandler Smith had expanded to 1.6 seconds with Hocevar in third.