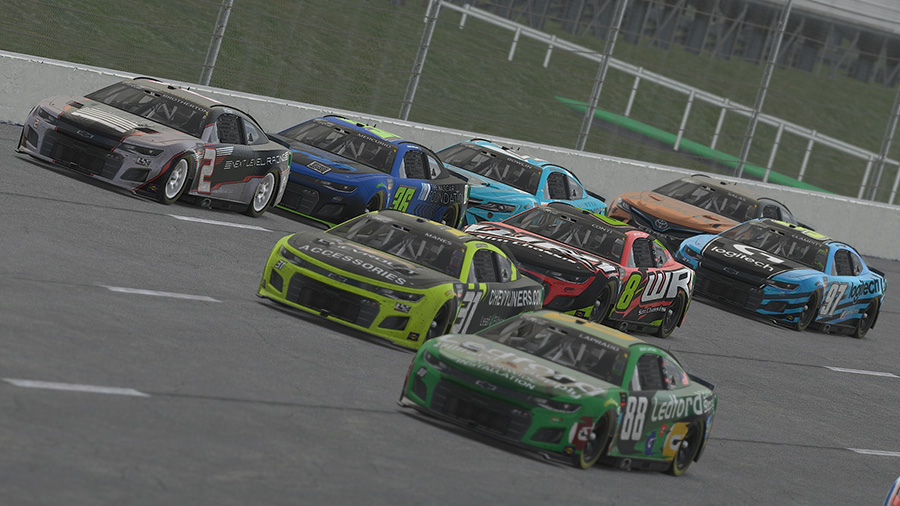 There are 40 spots on the eNASCAR Coca-Cola iRacing Series grid each year, but just a quarter of that field gets to call itself playoff drivers in any given season. Last year, the construction of that grid changed to put a premium on wins; a win and a top 20 spot in regular season points would be the bare minimum to get you in. Unfortunately for a handful of drivers, the regular season produced so many winners that some drivers visited the winner’s circle and still found themselves on the outside looking in.

This year, things are a little bit different. Nine winners through the first 12 events, and one winner on the cut line, make it possible that at least one driver could earn a playoff spot on points alone. Still, the Aug. 16 round at Watkins Glen International and Aug. 30 regular-season finale at Darlington Raceway both have the potential to shake the field up by producing a pair of new winners.

Here’s a look at the current playoff scene with who’s in, who’s on the edge, and who’s going to need a little help to make the cut:

Seeding priority in the playoffs goes first and foremost to the drivers with the most wins, and so far, nobody’s won more than twice. That honor belongs to Stewart-Haas eSports’ Steven Wilson (Atlanta, Road America), William Byron eSports’ Nick Ottinger (Bristol Dirt, Dover) and JR Motorsports’ Michael Conti (Las Vegas, Richmond). With that trio firmly within the top 10 in points and just two races remaining, it’s safe to say we should see all three of them donning playoff banners at Bristol.

XSET’s Casey Kirwan had been consistently fast all year long and in the hunt for the regular-season title with more top 10s than any other driver, but it took winning a full-contact drag race to the finish line at Pocono to truly take the pressure off his hunt for a playoff spot. Matt Bussa ensured that Kyle Long’s Mode Motorsports would get back to the playoffs by taking a checkered flag in the Coca-Cola 150 at Charlotte, while Charlotte Phoenix driver Graham Bowlin (Gateway) and Clint Bowyer Racing’s Femi Olatunbosun (Daytona) are sixth and seventh in points with a safe cushion to the cut line.

Four-time series champion Ray Alfalla of Joe Gibbs Racing is hoping to avoid the unlucky distinction of missing the playoffs with a race win for the second year in a row. Alfalla extended his all-time series win record this summer with a checkered flag at Nashville, but he sits 20th in the standings with just four points in hand ahead of 21st. Wood Brothers Racing driver and Kansas winner Garrett Lowe is a bit safer in 15th with a full race’s worth of points in hand on Alfalla, but will still need to tread carefully.

If there are any playoff spots left on points, the most likely “in” goes to Rise Esports driver Zack Novak; he’s fourth in points and has finished second multiple times this season. If there’s a second points-based spot available, it’ll likely go to one of the Jim Beaver eSports duo of Blake Reynolds and Michael Guest, whose consistency has their squad atop the teams championship, or Bobby Zalenski of Joe Gibbs Racing, who are separated by just eight points in the standings.

For everybody else, it’s probably down to win or go home. 23XI’s Mitchell deJong relied on road-course victories to get in last year, but only Watkins Glen is left on the schedule, and that went to Bowlin last year. Team Dillon eSports’ Corey Vincent and Elliott Sadler eSports’ Garrett Manes are within a handful of points of deJong as well. Anybody below them — a talented list which includes multiple past series winners and even defending series champion Keegan Leahy — will probably have Darlington circled as a do-or-die event.