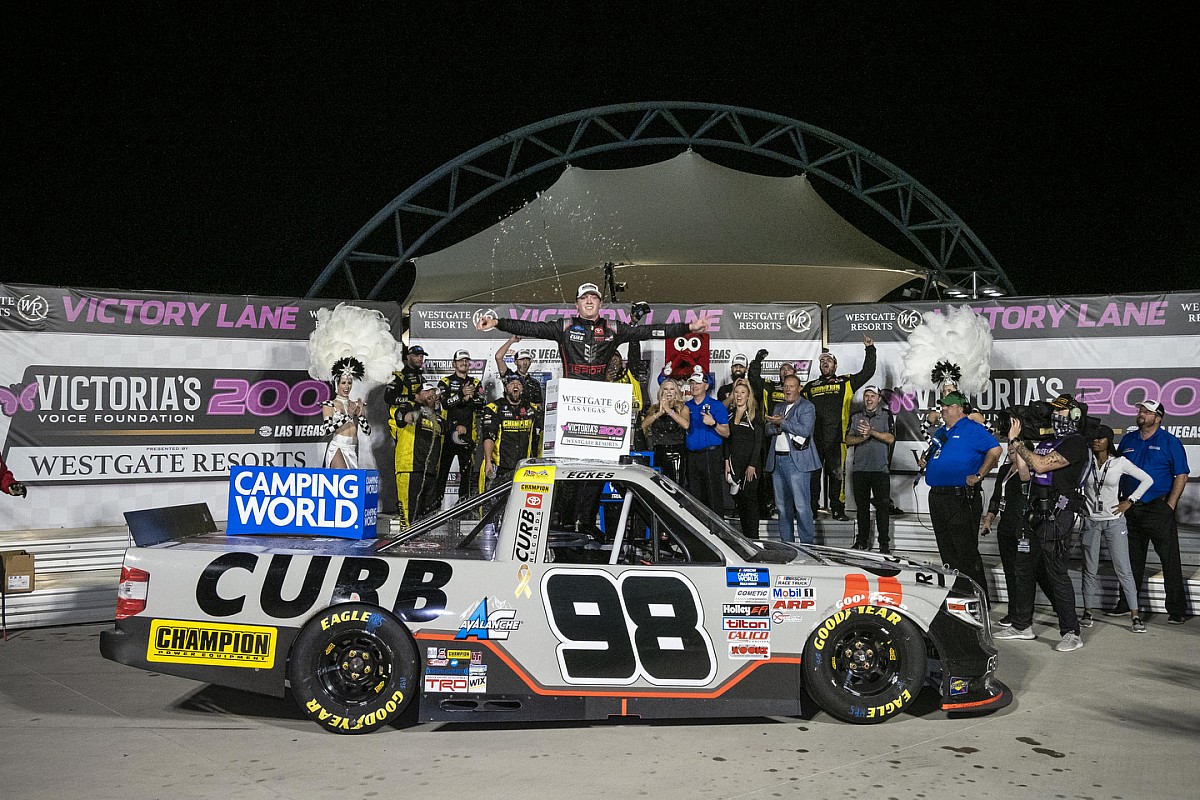 Todd Gilliland appeared to have the dominant truck in the race and led the way on a restart with four of 134 laps to go, but Eckes took the field three-wide and moved into the lead with a shove from Ben Rhodes.

Rhodes then began closing in on Eckes to challenge for the lead but a caution was displayed on the final lap for a wreck involving Tyler Hill. That froze the field and ensured Eckes’ win at Las Vegas Motor Speedway – his first win in 44 series starts.

Eckes, 20, has been running a partial schedule this season for ThorSport Racing in the No. 98 Ford and was part of a 1-2-3-4 finish for ThorSport.

“You can look at my (stats) and see how bad it is and how tough it is (to race in Trucks),” Eckes said. “Damn, this is big. It’s been a tough year.

“Yeah, that’s pretty much all I can say, it’s been a tough year since last November. Hopefully, I showed I can still do this.”

Eckes competed fulltime last season for Kyle Busch Motorsports but did not return to the organization this year. A part-time ride at ThorSport was Eckes’ only NASCAR opportunity for the 2021 season.

With two races remaining before the Championship 4 is set, Rhodes now leads the playoff standings ahead of Nemechek, Stewart Friesen and Matt Crafton.

Following the break between Stages 2 and 3, several trucks pit but Hocevar stayed out and inherited the lead when the race returned to green on Lap 67. Gilliland restarted 14th, the first on four new tires.

On Lap 71, Tyler Ankrum got loose and started spinning in Turn 2 and Chandler Smith plowed into him, which triggered a multi-car accident that also collected Hailie Deegan, Creed and Chase Purdy.

Creed appeared to dive to the apron to avoid the accident but instead slammed into the stopped truck of Chandler Smith.

The race returned to green on Lap 78 with Austin Hill out front, followed by Hocevar, Tanner Gray, Sauter and Gilliland.

On Lap 81, Nemechek once again stopped on the track without power, which brought out the seventh caution of the race.

A number of trucks pit during the caution with Brett Moffitt the first off pit road. On the restart on Lap 85, Tate Fogleman remained on the track and led the way followed by Bret Holmes and Moffitt.

Moffitt moved into the lead on Lap 85 only to see Gilliland power back out front on Lap 86.

With 30 laps remaining in the race, Gilliland maintained about a 1-second lead over Eckes as Friesen ran third.

Drew Dollar and Jack Wood made contact in Turn 4 on Lap 114 to bring out another caution in the race. Most of the lead-lap trucks pit with Gilliland the first off pit road.

On the restart on Lap 118, Sauter was followed by Gilliland, Eckes, Rhodes and Crafton.

Gilliland wasted no time in powering around Sauter with his new tires and moved back into the lead.

Hocevar spun off Turn 4 while attempting to enter pit road on Lap 126, which brought out the ninth caution of the race. NASCAR then penalized Hocevar a lap for intentionally causing a caution.

Gilliland remained out front on the restart with four laps to go.

Gilliland held off Rhodes to take the Stage 2 win, his fourth of the 2021 season.

Hocevar was third, Friesen fourth and Creed rounded out the top-five.

Following the break between Stages 1 and 2, all the lead-lap trucks pit with Gilliland edging Nemechek off pit road. Sauter was penalized for an uncontrolled tire during his stop and had to restart from the rear of the field.

On the restart on Lap 37, Gilliland was followed by Nemechek, Chandler Smith, Zane Smith and Eckes.

Friesen powered into the lead on the restart only to see Gilliland reclaim the top spot on Lap 38.

NASCAR put out a caution on Lap 40 for debris in Turn 3 as Zane Smith had a left-rear tire come apart after contact with Nemechek battling for position.

The race returned to green on Lap 46 with Gilliland out front followed by Rhodes and Friesen.

Rhodes wasted no time getting around Gilliland after the restart to take the lead for the first time in the race. Gilliland returned to the lead on Lap 51.

Nemechek fell off the pace with power issues and finally came to a stop on the backstretch on Lap 53, which brought out a caution.

Gilliland continued to lead the way on the restart on Lap 57.

Nemechek dominated the first stage, leading all 30 laps on his way to the Stage 1 win over Gilliland.

Chandler Smith was third, Rhodes fourth and Friesen rounded out the top-five.

Nemechek started on the pole and remained out front while race was placed under caution on Lap 6 when Chris Hacker spun and wrecked off Turn 4.

The race returned to green on Lap 9 with Nemechek out front followed by Gilliland and Friesen.

With 10 laps remaining in the first stage, Nemechek had opened a nearly 1-second lead over Gilliland with Chandler Smith in third.