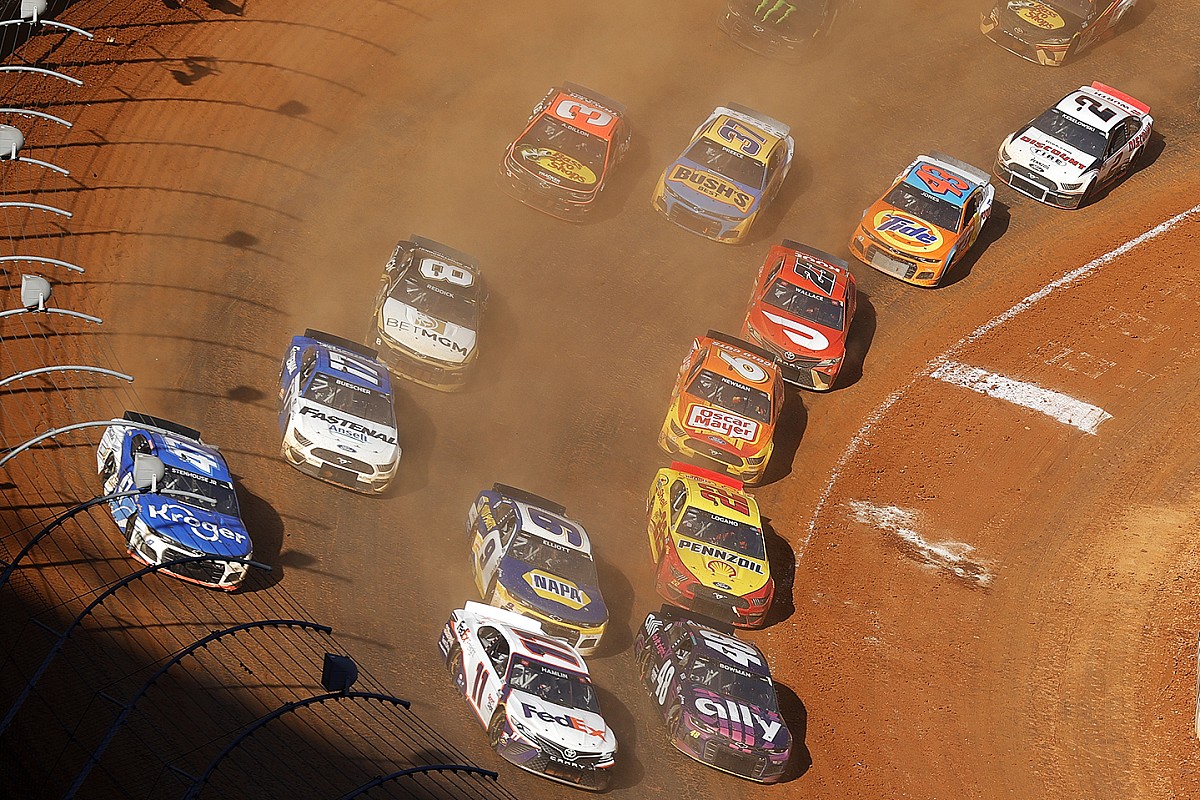 The race, just the second on dirt in the Cup series since 1970, was run during the day last year and the move to Sunday night this season is expected to improve conditions for racing.

While it is the second consecutive season the Cup series has raced at Bristol (Tenn.) Motor Speedway on a dirt surface, it will be the first time with the Next Gen car and its wholesale technology changes and 18-inch tires.

The temporary dirt track features 19-degree banking in the corners and a 50-foot-wide racing surface. An estimated 23,000 cubic feet of dirt has been added to the .533-mile contract surface.

How the track is prepared prior to the race, including the amount of water used and where it’s placed, could produce an even more entertaining race than last season.

“Hopefully, we have multiple grooves. It was fun the first 5 to 10 minutes of practice,” said driver Chase Briscoe, who ended up second-fastest in Friday’s first practice. “They could definitely get way more aggressive and till (the track surface) deeper and water it more.

“Walking in here three hours before (practice), it was already dry and dusty. … Overheating is not a problem and just how this dirt is versus the dirt that we have at a place like Eldora, it doesn’t clump up as much, so I think we could get a lot more water on it and till it deeper and be fine.”

Tyler Reddick, who had fastest average single-lap speed in Friday’s first practice, believes there is potential for “a lot of lane choices” in Sunday night’s race.

“Well, with this car, from what I saw as it transitioned and as it changed – in dirt racing, the line is going to be different just about every single lap as the track changes,” he said. “I think there is going to be a point in time, in the beginning of the race certainly, where one lane is going to be more dominant than the other.

“We saw it in Truck practice a little bit – you’re going to have options as the track really starts to widen out; as the middle wears away and the tacky dirt kind of burns off. I think there is going to be a lot of lane choices, based off of just where this tires’ grip is and where the power in this car is, horsepower-wise.

“But a lot of these things just depend on what the weather does Saturday and how much that really dictates what we can and can’t do to this track Sunday getting ready for our race.”

Kyle Busch and Briscoe both said they were surprised with how much grip the Next Gen car had, especially coming off the corners.

With the Next Gen’s 18-inch wheels, Goodyear basically redesigned its dirt tire for the Cup series, moving from a bias play to radial tire and incorporates a new tread pattern and compounds adjusted to be more resistant to heat and wear.

“I’m surprised about the amount of grip this car has; more drive off of the corners. I think most of that has to do with the tire,” Busch said. “The tires are really wide. It has really good footprint on it based on looking at its tread pattern versus an open wheel tread pattern.

“I would say the tire’s a benefit, but the car everywhere we have been with this thing so far has had added grip. Plus, we are a 100 less horsepower than we were last year, so that’s going to help with the throttle on time as well.”

Visibility became an issue by the end of the Cup Series’ first practice as the track dried out while the Truck Series practice, which ran before it, had few issues.

Running the races at night is expected to help alleviate the dust problem.

“There at the end it definitely got where it was pretty dusty,” Briscoe said. “You couldn’t really see much in (Turns) 1 and 2, but that’s typical for dirt racing when the sun is out. When you start with the track that dry, that’s going to happen.

“I don’t think the visibility will be as bad Sunday night. It’s still going to be dusty if they start off that dry, but the sunlight is what really amplifies the dust.”