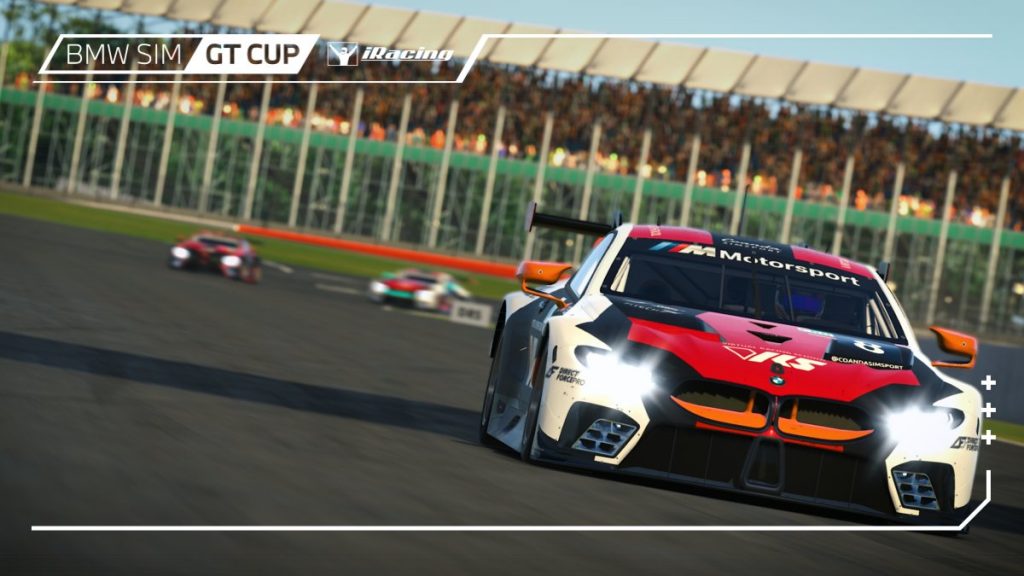 Luck finally went the way of Mitchell deJong and Joshua Rogers in the top split of Sunday’s BMW SIM GT Cup round at Silverstone Circuit, as the duo led nearly every lap of the 63-lap race to take their first checkered flag of the year in the series. Rogers qualified on pole and dominated the early stretch, while deJong stepped in for the second half of the race and held off the second place team of race starter Maximilian Benecke and closer Enzo Bonito, winners two weeks ago at Suzuka, by 3.401 seconds. Chris Lulham and Daniel Juncadella completed the podium.

With the highest strength of field yet in a BMW SIM GT Cup top split in 2021, well exceeding 7400, the racing was intense among a lineup of capable drivers. 24 of the 36 starters qualified within a second of one another to set the grid, while 23 made it to the finish on the lead lap, and another six only finished one lap down. However, in spite of Benecke and Bonito pressuring Rogers and deJong for the race lead, only Mikkel Gade and Matti Sipila registered a lap led apiece during the pit cycle to break up the winning duo’s perfect race.

Max Verstappen’s continued bid to win a BMW SIM GT Cup race suffered an early blow after damage in contact with Ayhancan Guven on Lap 6; he would fall outside of the top 10 as a result. Teammate Gianni Vecchio would take over at the halfway point and never leave the top 10 after the pit cycle, helping the duo recover to finish eighth.

Top split results from Sunday’s BMW SIM GT Cup round at Silverstone were as follows:

The BMW SIM GT Cup will feature 10 races over the course of 2021, split into two seasons. The first five-race season will feature the BMW M8 GTE, while the second will shift to the new BMW M4 GT3 that made its iRacing debut in December. Each race features a mandatory driver changeover and a $4,200 prize pool split among the top three finishers in the top split, with the winning duo taking home $2,400. The remaining rounds of 2021 Season 1 are as follows: