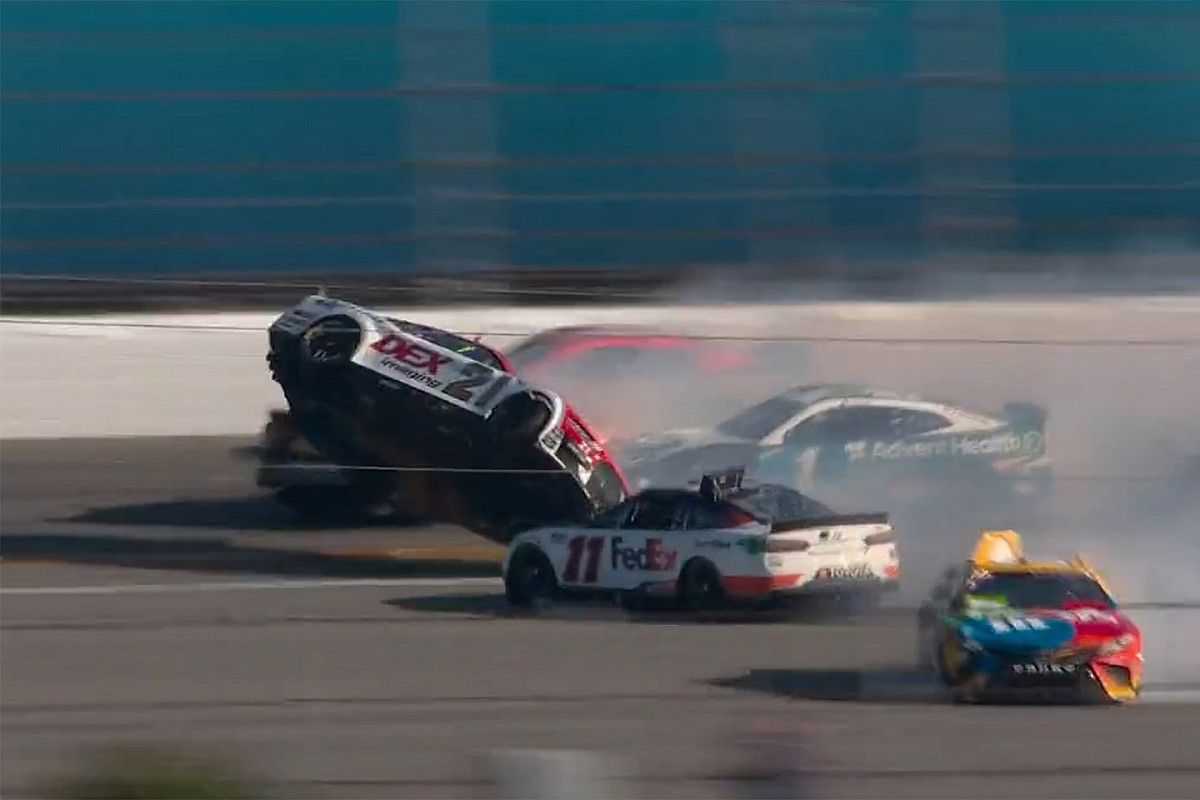 While battling for stage points, a push gone awry sent rookie Harrison Burton spinning down the track and into William Byron. The push came from Duel #1 winner Brad Keselowski.

Burton’s Wood Brothers machine would then go airborne, briefly flipping upside down and collecting several more cars in the process.

Burton, Byron, Hamlin, and Ross Chastain are all out of the race after the incident. Christopher Bell also went behind the wall for repairs. Additionally, Alex Bowman and both Kyle and Kurt Busch sustained damage in the crash.

“You always hear about how it goes quiet and that’s true,” said Burton after being checked and released at the infield care center.

“I’m fine. I’ve hit a lot harder before, that’s for sure. It’s just unfortunate. I hate it for the Wood Brothers group. They brought a really fast Ford Mustang down here and ended up on our lid, so that’s never good.  I’d like to look back and see what happened. I don’t know, I just got pushed and didn’t take it the right way – the car didn’t take it the right way or got pushed in the wrong spot. I’m not sure.  I couldn’t really tell.  I was looking out front to see what I had to do next to side draft the next guy that was on me, so just a bummer. I don’t really know what we could have done different, but we’ll move on and get better from it.”

On the radio, Keselowski seemed confused by the wreck. “I was attached to him pretty good there … I’m surprised.”

Hamlin crashes out of the 500 for the very first time

However, Hamlin placed blame on Keselowski as the pusher after he was released from the infield care center.

“It looked like the two cars on top,” explained Hamlin. “The 6 (Brad Keselowski) was pushing the 21 (Harrison Burton) and you could see the 21 was kind of getting out of control there, so you know the mindset was that you’ve got to back off but I think the 6 was just insistent on pushing him at all costs and eventually turned the 21 around. Tough, you know, considering it was just for the stage. We were kind of boxed in there where I noticed that something was going to happen, but I was boxed in, I was behind a teammate and I wanted to try to help.

It’s Hamlin’s first DNF ever in the Daytona 500 and his first in any Cup race since July, 2020 at Indianapolis Motor Speedway.

“Again, just too aggressive pushing right there when they weren’t lined up and in control,” he concluded.