Daniel Hemric: “You never know it’s going to be that moment”

Hemric made his first NASCAR national series start in 2013 in a Truck Series race at Martinsville, Va. Despite 12 second-place finishes over the next eight seasons in Trucks and Xfinity, he was unable to crack Victory Lane.

But when he finally did last Saturday at Phoenix Raceway in the 2021 Xfinity Series championship race, not only did a career’s-worth of emotion come with it, but also a series title.

In his lone season with Joe Gibbs Racing this year, Hemric had not won a race but still managed to qualify for the Championship 4 on points, earning the final spot thanks to his XX-place finish in the semifinal race at Martinsville.

So, after nudging then-leader Austin Cindric out of the way on the final turn of the final lap at Phoenix, not only did he earn the moniker of ‘race winner’ but also that of ‘champion.’ 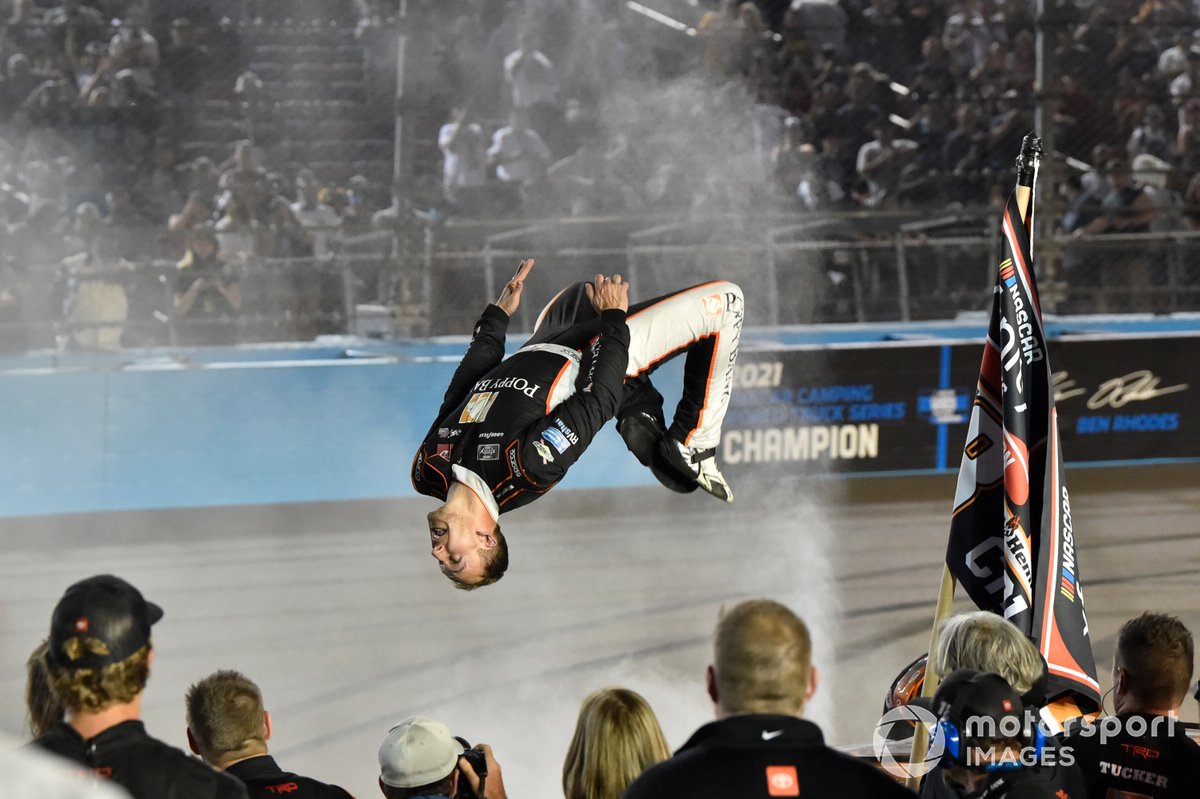 “Obviously you can only dream it will work out the way it did. Unbelievable that it turned out the way it did,” Hemric, 30, said. “I could have only asked for an opportunity to line up on the front row with five (laps) to go, a green-white-checkered situation, then be able to have it end like it did.

“Pretty mind-boggling, but something that was good to rekindle those feelings, have those dreams if you want to call them, to be able to live them out, pretty life changing, for sure. Something I won’t forget for the rest of my life.”

Hemric’s Phoenix weekend got off to a rough start as the hauler carrying his No. 18 Toyota to the track broke down in Texas. His car finally showed up on Friday with little time – about 30 minutes – to spare prior to the day’s lone practice session.

Still, considering the highs and lows of Hemric’s NASCAR career – including spending the 2019 season without a NASCAR ride – the pre-race issues may have seemed par for the course.

“I told everybody, you control what you can control, right? The furthest thing out of my control is if my race hauler gets here with the race car,” Hemric said. “This day and age, at one point in my life that was important, I had to get it there.

“Yet here we are just about as far away from my race shop as I can get. Truck broke down in Texas. I had an incredible group of folks, more than I can name, rallied together, made phone calls.

“It got picked up at 3 a.m. on the side of the road, just a car and a tire dolly and a little itty-bitty like carry toolbox. Not even the toolbox. That’s what we had to work with.”

In the end, however, Hemric placed the future of his NASCAR career in his own hands – and it paid off better than he could have ever expected.

His one-year deal at JGR for 2021 provided no guaranteed salary and he would basically get paid from race winnings. In other words, how well he performed.

Even before the championship weekend, his performance during the year was good enough to land another fulltime ride in the Xfinity Series for the 2022 season with Kaulig Racing.

Still, leaving JGR on a race-winning and championship-winning moment may have seemed a bit strange.

“It’s obviously bittersweet, right? When you win one, you want to win the next one. It’s all fine and good,” Hemric said. “I’m just thankful to be able to drive for Coach (Joe Gibbs), be around him, his group, his people. He teaches and preaches about people. That’s all he talks about.

“Betting on yourself, it’s hard to beat that.”