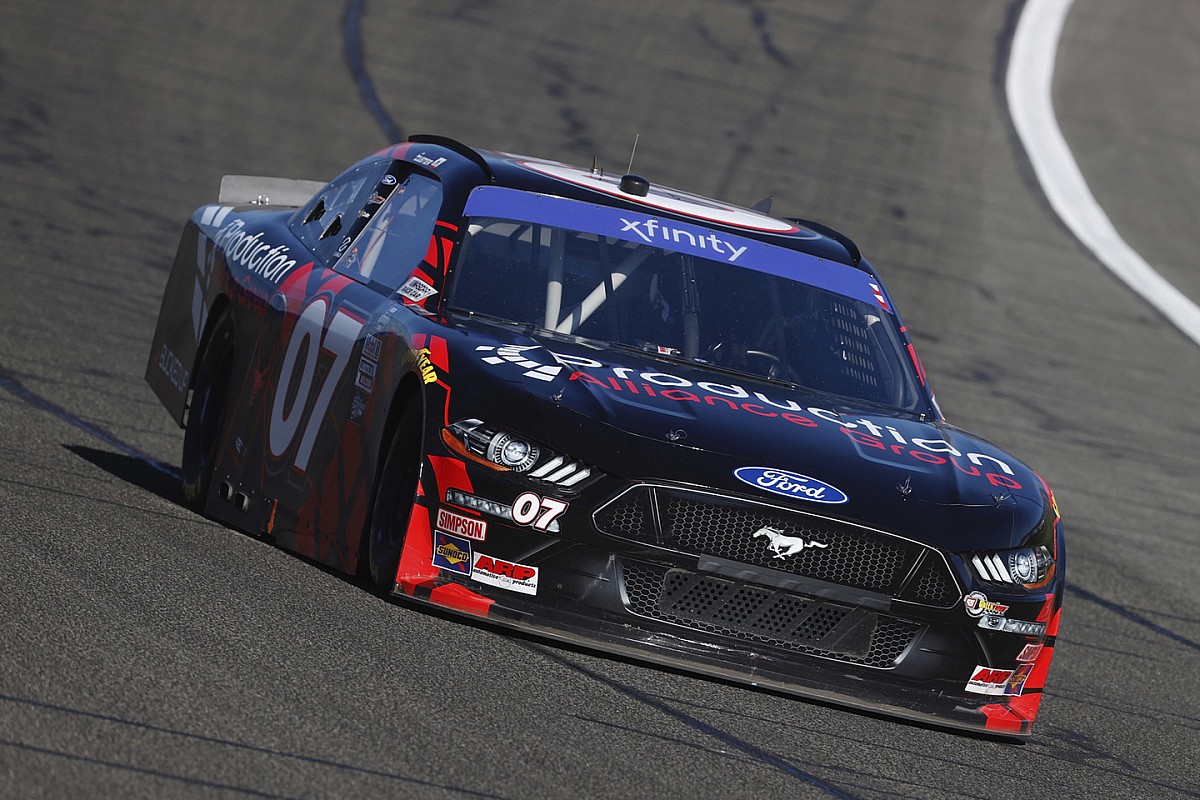 Custer’s No. 07 Ford clearly was the class of the field but slow stops on pit road repeatedly forced him fight back to the lead.

He restarted seventh on Lap 129 of 165 following a round of pit stops and grabbed the lead for the final time on Lap 145. Custer, however, then had to hold off a wave of challengers in three overtimes before securing his first series win since 2019.

Anthony Alfredo, who had the newest set of tires in the field, lined up alongside Custer on the final restart but Alfredo seemed to lose some of his advantage after waiting through a 23-minute red flag.

On the final restart, Alfredo briefly appeared to get pushed to the lead but Custer soon powered past him and held off Noah Gragson by 0.565 seconds for his 10th career win.

“It was just an awesome car. It was a rocket ship all day,” said Custer. “I can’t thank (team owner) Bobby Dotter enough and everybody who was involved on this car.

“It was just unreal how fast we were. It’s awesome to win at home and I can’t wait until tomorrow.”

Trevor Bayne – making his first start with Joe Gibbs Racing – ended up third, Josh Berry was fourth and Alfredo ended up fifth – his first top-five finish since the 2020 season.

Following the break between Stages 2 and 3, the lead lap-lap cars all elected to pit with Jones the first off pit road.

On the restart on Lap 77, Jones was followed by Allgaier, Gragson, Berry and Daniel Hemric.

Custer, who lined up eighth after a slow pit stop, wasted no time in moving back to the lead shortly after the restart.

Allmendinger was forced to pit under green on Lap 82 with what he believed to be a left-rear loose wheel. He returned to the track in 33rd, one lap down.

With 50 laps remaining, Custer had opened a 1.8-second lead over Gragson while Allgaier ran third.

On Lap 103, Brandon Brown spun off Turn 2 to bring out the seventh caution of the race. All the lead-lap cars pit with Allgaier the first off pit road.

The race returned to green on Lap 109 with Allgaier out front followed by Jones, Gragson, Berry and Herbst. Custer had another slow pit stop and lined up seventh.

Allgaier got a good restart but Gragson soon ran him down and grabbed the lead just before the start of Lap 110.

With 39 laps remaining, Berry used a three-wide move to grab second as Allgaier dropped to third.

Jade Buford spun on Lap 124 and hit the inside wall to bring out a caution. Most of the lead-lap cars pit with Allgaier the first off pit road. Gragson overshot his pit stall and had an extended stop on pit road.

When the race returned to green on Lap 129, Ty Gibbs – who did not pit – led the way followed by Alfredo (who also stayed out), Allgaier, Mayer and Jeremy Clements. Custer lined up seventh and Gragson 14th.

Allgaier quickly got around Gibbs to retake the lead on the restart. One lap later, Gragson had made up 13 spots and moved back into the lead.

With 20 laps remaining, Custer moved into second set his sights on Gragson for the lead.

Custer went to the inside of Gragson with 16 laps to go and reclaimed the lead as Gragson dropped to second and Mayer ran third.

NASCAR displayed a caution on Lap 141 for a tire carcass in Turn 1. Most drivers stayed on the track but a handful of cars pit, including Gibbs, Alfredo (who had a set of new tires remaining) and Jeffrey Earnhardt.

When the race returned to green on Lap 145, Custer led the way followed by Gragson, Mayer, Bayne and Allgaier. Alfredo lined up 22nd and Gibbs 21st.

Brett Moffitt hit the wall and dropped debris on the track in Turn 1 on Lap 146 and sent the race into a two-lap overtime. Custer led the way followed by Gragson, Bayne, Allgaier and Mayer. Gibbs lined up 12th and Alfredo 13th.

Jones and Hemric made contact shortly after the restart and sent the race into a second overtime. On the restart, Custer led followed by Bayne, Gragson, Allgaier and Alfredo.

Brandon Jones slid into and destroyed the sand barrels at the entrance to pit road, requiring an extended cleanup and sent the race into a third overtime.

Following a 23-minute red flag to clean the track of debris, the race entered a third overtime. Custer still led the way followed by Bayne, Alfredo, Gragson and Allgaier.

Custer easily held off Jones – who recovered from a spin earlier in the race – to take the Stage 2 win.

Allgaier was third, Gragson fourth and Gibbs rebounded from an accident to finish fifth.

Following the break between Stages 1 and 2, all the lead-lap cars elected to pit with Hemric first off pit road. The race resumed on Lap 43 with Hemric out front followed by Gibbs and Gragson.

On Lap 43, Ty Gibbs ran side-by-side with leader Hemric with the two making contact and Gibbs spinning into the infield grass to bring out a caution.

The returned to green on Lap 49 with Hemric out front, followed by Gragson, Custer, Berry and Allgaier.

Custer powered into the lead shortly after the restart as Gragson moved into second.

Brandon Jones spun on Lap 56 to bring out another caution but was able to keep his No. 19 Toyota off the wall. The race resumed on Lap 61 with Custer still in command.

With five laps remaining in the stage, Custer had built a 1.5-second lead over Allgaier as Gragson ran third.

Bayne held off late charge from Custer to claim the Stage 1 win in his first series race since the 2016 season.

Allgaier was third, Gragson – who tagged the wall on the final lap – was fourth and Gibbs rounded out the top-five.

Allmendinger started on the pole and led the way early.

Austin Hill hit the wall on Lap 2 after getting hit from behind by Berry. Hill was forced to pit under green to make repairs to his No. 21 Chevrolet.

On Lap 7, Landon Cassill’s car fire apparently from a broken oil line, which brought out a caution. The race returned to green on Lap 14 with Allmendinger out front, followed by Custer and Bayne.

Bayne quickly powered into the lead shortly after the restart.

NASCAR issued a caution on Lap 20 for debris on the track which was likely dropped by the No. 91 of Mason Massey. The race resumed on Lap 25 with Bayne out front, followed by Custer, Allmendinger and Gragson.