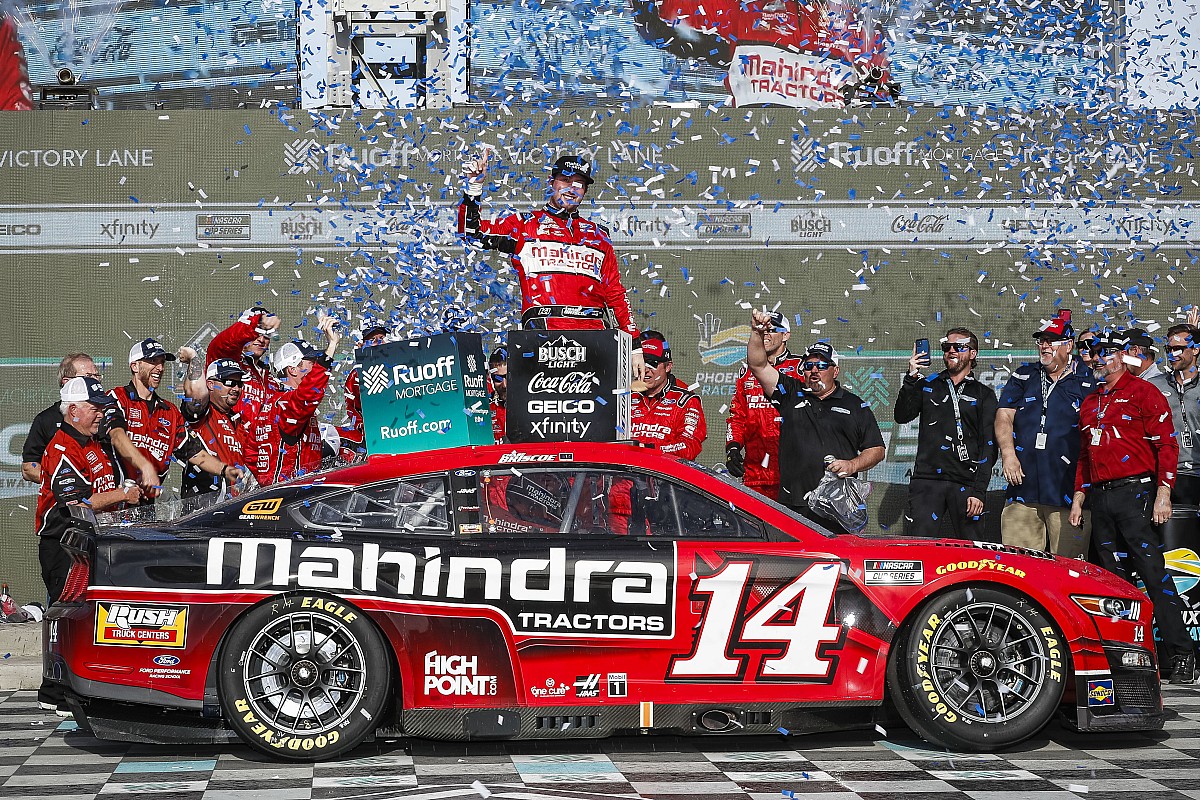 Briscoe, who struggled through his rookie year with Stewart-Haas Racing last season, powered to the lead on a restart with three of 312 laps remaining at Phoenix Raceway and held off Ross Chastain by 0.771 seconds to take his first win in 40 career starts.

At the end of the race, the top three drivers – Briscoe, Chastain and Tyler Reddick – were all looking for their first career wins.

“That’s unbelievable. I was crying the whole last lap,” Briscoe said. “I mean, this is definitely a team win. I got to thank everyone that has gotten me to this point. Seven years ago, I was sleeping on a couch, ready to give up. They gave me an opportunity and it’s led to this.

“So blessed to be driving at the organization, the team, the car that was my hero (Tony Stewart) growing up. To get this No. 14 back in Victory Lane, to do it with Mahindra Tractors, their first year in the sport, everybody that’s believed in me – it’s unbelievable.”

Told he looked a lot like Stewart on the track Sunday, Briscoe said, “Yeah, those restarts, I mean, we were sliding, everything else. I hope the race fans enjoyed the race. It was unbelievable from my point.

“So thankful to have (fans) back. Without you guys, we don’t have a sport, don’t get to race, do what we do for a living. I wish my wife and baby was here. Definitely special and one that’s going to be remembered forever.”

Blaney had dominated much of the race and led 143 laps but it was Briscoe’s No. 14 Ford team that got him off pit road first in the final two pit stops of the race and allowed him to control the restarts.

Reddick ended up third, Blaney was fourth and Kurt Busch rallied to round out the top-five.

Following the break between Stages 2 and 3, the lead-lap cars all pit with Elliott the first off pit road.

On the restart on Lap 195, Chase Elliott was followed by Harvick, Reddick and Blaney.

With 100 laps remaining in the race, Elliott maintained a small lead over Reddick, with Blaney close behind in third and Harvick and fourth.

On Lap 221, Martin Truex Jr. wrecked on the backstretch after coming off Turn 2, which brought out the sixth caution of the race. The damage was extensive and brought an early end to his race.

“Coming off of Turn 2 there, I’m kind of neutral free and then all of a sudden it shot straight into the fence. I cut a right-front down running up there in the glue or something.”

All the lead-lap cars pit with Elliott once again the first off pit road. Suarez was penalized for speeding and had to restart from the rear of the field.

On the restart on Lap 230, Elliott was followed by Briscoe, Chastain, Harvick and Austin Dillon.

Briscoe quickly powered back to the lead shortly after the restart.

With 73 laps to go, Kyle Larson was forced to pit under green with what appeared to be engine issues with his No. 5 Chevrolet. He ended up taking his car to the garage, bringing an end to his race.

With 35 laps remaining, Briscoe maintained a small lead over Elliott with Harvick still in third.

On Lap 286, Erik Jones spun on the backstretch and tagged in the inside retaining wall to bring out a caution.

The lead-lap cars all pit with Briscoe first off pit road. On the restart on Lap 292, he was followed by Harvick, Chastain, Blaney, Reddick and Elliott. Kyle Busch was penalized for speeding on pit road and had to restart from the rear of the field.

Elliott went for a spin down the backstretch on Lap 304 to bring out the eighth caution of the race.

Most of the lead-lap cars remained on the track, with just a handful of teams further back deciding to take new tires.

The race returned to green on Lap 310 with Briscoe out front followed by Reddick, Chastain, Harvick and Blaney.

Blaney held off a fast-approaching Elliott to win Stage 2, his first stage victory of the 2022 season.

Harvick edged William Byron for third and Larson rounded out the top-five.

Following the break between Stages 1 and 2, most of the lead-lap drivers elected to pit with Elliott the first off pit road.

When the race returned to green on Lap 70, Blaney – who stayed out – led the way, followed by Kyle Busch and Cole Custer. Elliott lined up fifth.

With 85 laps remaining in the stage, Blaney’s lead had shrunk to just over a second ahead of Elliott with Byron and Harvick battling for third.

On Lap 119, Christopher Bell spun off Turn 2 to bring out a caution. The lead-lap cars all pit with Elliott the first off pit road.

When the race resumed on Lap 126, Elliott was followed by Blaney, Byron and Harvick.

Blaney went to the inside of Elliott on Lap 133 and moved back into the lead.

With 40 laps to go in the second stage, Blaney had opened a 1.383-second lead over Elliott, with Harvick in third.

With 10 laps remaining, Elliott had closed back up to Blaney’s rear bumper and trying to set up a pass to the lead. Harvick was third and Byron fourth.

Aric Almirola hit the wall with four laps to go but was able to continue without a caution.

Elliott was third, Reddick fourth and Alex Bowman rounded out the top-five.

Blaney started from the pole and led every lap until NASCAR displayed a competition caution on Lap 26 to allow teams to check tire wear.

All the lead-lap cars pit with Blaney the first off pit road. However, he, Denny Hamlin, Ricky Stenhouse Jr. and Michael McDowell were all penalized for speeding and had to restart from the rear of the field.

On the restart on Lap 32, Logano led the way.

Briscoe went to the outside of Logano on Lap 33 and grabbed the lead for the first time in the race.

With 15 minutes remaining in the first stage, Briscoe had opened about a half-second lead over Logano with Byron running third.

On Lap 46, one of Corey LaJoie’s wheels came off his No. 7 car after he hit the wall, which forced NASCAR to throw a caution.

A handful of cars elected to pit but Briscoe stayed on the track and remained in the lead when the race returned to green on Lap 53.

Byron quickly powered to the lead on the restart.

Larson and Harrison Burton (unapproved adjustments) and Stenhouse (engine change) all had to start the race from the rear of the field.