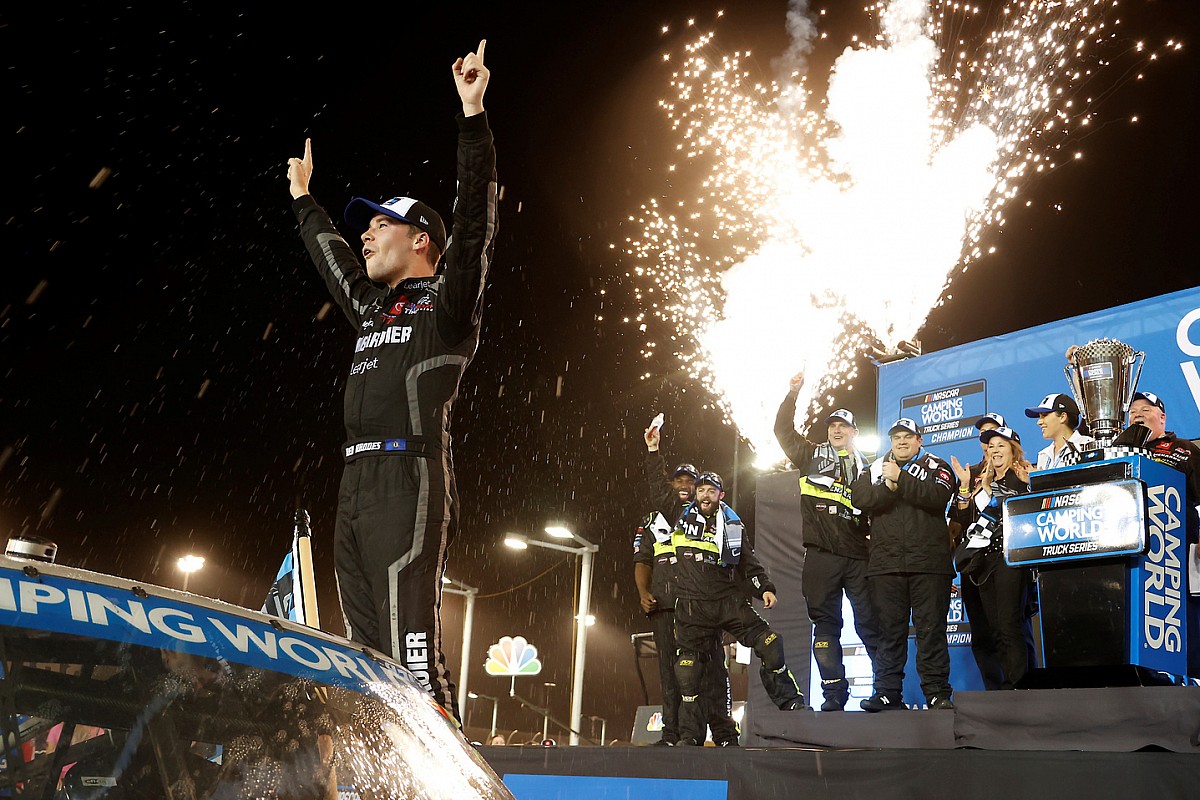 Sheldon Creed dominated much of the race, but Smith powered around him with 17 of 150 laps remaining to take the lead and never looked back, holding off Stewart Friesen by 4.694 seconds for his second win of the 2021 season.

“All glory to the man upstairs. Without him, none of this would be possible and I wouldn’t have the awesome relationships with my racing family – this is my family,” Smith said.

Smith’s win was the 10th victory of the year for Kyle Busch Motorsports and he clinched rookie of the year honors with the win.

With the race winding down, Zane Smith had gotten around Rhodes to become the highest running of the Championship 4 but with eight laps to go, Rhodes caught back up with Smith, the two briefly made contact and Rhodes got around him to take the position.

Rhodes, 24, ended up finishing third in the race – the best of the four title contenders – which handed him his first NASCAR national series championship.

Rhodes had kicked off the 2021 season by winning the first two races – on the Daytona oval and the Daytona Road Course.

He didn’t win again but remained remarkably consistent during the playoffs and his seventh-place finish last weekend at Martinsville, Va., locked him into the Championship 4.

“I can’t even breathe. That was the hardest last 40 laps of a race I’ve ever driven in my life,” Rhodes said. “I was doing thing with the race truck that I probably shouldn’t have been doing. It was dumb but I everything to lose.

“We brought it home and won. I don’t even know what to say. This is crazy. I’m so proud of my ThorSport Racing group.”

Creed finished fourth in the race and Zane Smith ended up fifth.

Nemechek, who was a favorite to win the title after a five-win season, was forced to pit under green on Lap 7 with a flat tire after contact with Kris Wright and the wall. He battled back from two laps down to end up seventh.

Following the break between Stages 2 and 3, the lead-lap trucks all pit with Friesen the first off pit road.

When the race resumed on Lap 100, Friesen was followed Chandler Smith, Creed and Rhodes.

Tate Fogleman stalled on the track on Lap 101 to bring out a caution just after Creed took over the lead. Nemechek received the free pass and returned to the lead lap.

The race returned to green on Lap 106 with Creed out front followed by Friesen, Chandler Smith, Gilliland and Rhodes. Nemechek lined up 24th.

With 41 laps to go, Zane Smith passed Rhodes to become the highest running Championship 4 driver in the race.

With 30 laps remaining, Creed held a small lead over Friesen while Chandler Smith was third and Zane Smith fourth.

On Lap 133, Chandler Smith went to the inside of Creed and came away with the lead.

With eight laps to go, Rhodes and Zane Smith made contact with Rhodes taking over the fourth position and the highest running Championship 4 contender.

Chandler Smith passed Creed with one lap remaining and held on for the Stage 2 win.

Rhodes ended up third, Friesen fourth and Gilliland rounded out the top-five.

Following the break between Stages 1 and 2, the lead-lap trucks all pit with Creed the first off pit road.

On the restart on Lap 54, Creed was followed by Rhodes and Gilliland.

With 25 laps remaining in the second stage, Creed maintained a small lead over Rhodes while Chandler Smith had moved up to third. Nemechek remained mired in 30th.

With 10 laps to go, Creed had about a 1-second lead over Chandler Smith as Rhodes had dropped to third but the highest running of the Championship 4 contenders.

Chandler Smith took the Stage 1 win over Creed just as Taylor Gray hit the wall on the final lap.

Gilliland was third, Friesen fourth and Rhodes rounded out the top-five.

Chandler Smith started on the pole but Creed grabbed the lead on the first lap.

On Lap 7, Nemechek was forced to pit under green for a flat tire. When he returned to the race, he was in 35th and two laps down.

On Lap 12, Lawless Allan wrecked on the frontstretch to bring out a caution. Most of the lead-lap trucks remained on track and Creed led the way on the restart on Lap 19.

Chandler Smith briefly got past Creed to take the lead on Lap 31 only to see Creed reclaim the lead one lap later.

With 10 laps remaining in the stage, Chandler Smith again powered past Creed to move back into the top spot.