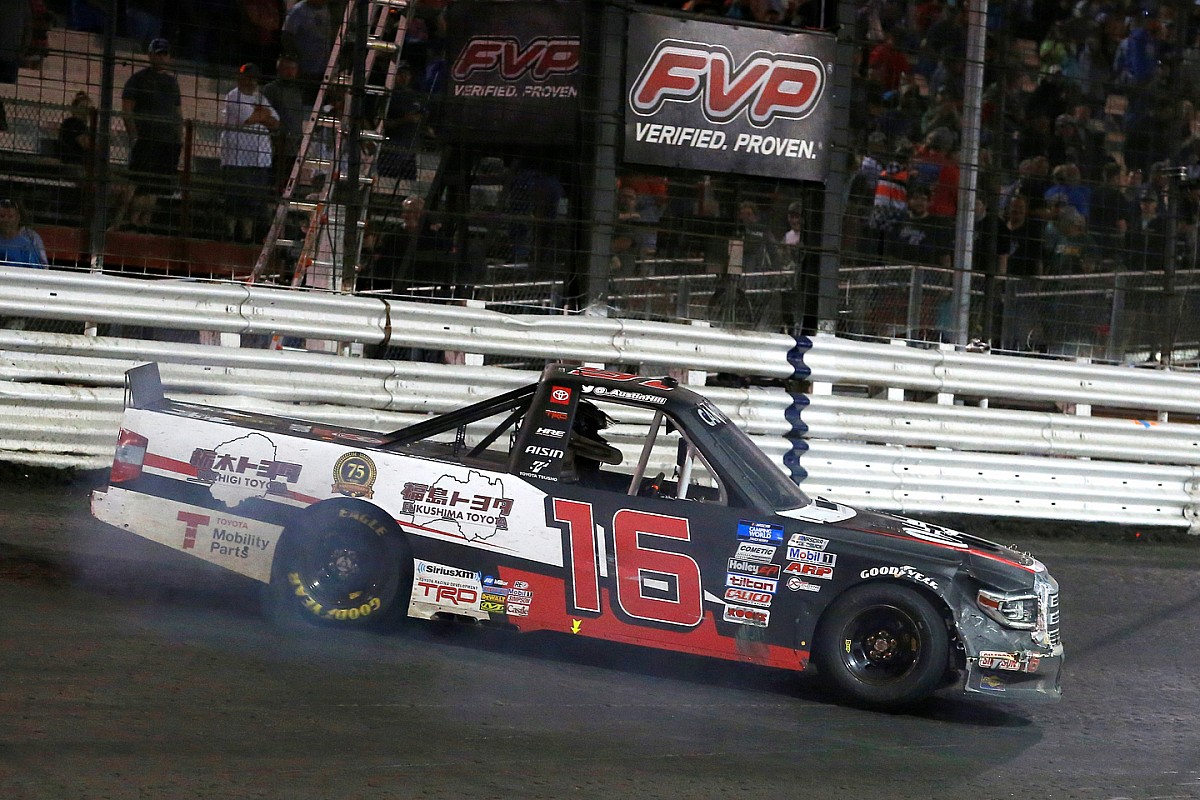 Hill was ruled the leader when a caution came out during the third of four overtimes to take the lead for just the second time in the race.

When the fourth two-lap overtime began, Hill got a strong restart, cleared for the lead and held off Chandler Smith by 1.207 seconds to win the first series race at the iconic dirt half-mile track.

“We got stuck back in the field and I didn’t think we were going to make it back up front – track position was huge. It was really hard to get around people,” Hill said. “You had to kind of rough them up a little bit to get around them.

“I just kept my head down. This team right here, everybody at (Hattori Racing Enterprises), they never quit. That’s the thing I love about this group. We don’t quit when we think we’re down and out – we just keep coming back.

“If you had told me I would win a dirt race this year, I would have told you, you were lying. This is awesome.”

The win is Hill’s first of the 2021 season and seventh of his career.

Following the break between Stages 2 and 3, Kraus led the way when the race returned to green on Lap 91.

Chandler Smith quickly powered into the lead after the restart and on Lap 92, Jack Wood and Parker Price-Miller wrecked in Turn 4 to bring out the sixth caution of the race.

The race resumed on Lap 101 with Chandler Smith out front but Carson Hocevar powered around him on the outside to take the lead.

On Lap 102, Chandler Smith went inside on Hocevar and reclaimed the top spot.

Kraus spun in Turn 4 on Lap 106 with a left-rear tire down, which forced NASCAR to throw a caution. The race resumed on Lap 112.

Stewart Friesen and Ryan Truex spun off Turn 4 on Lap 116 to bring out the eighth caution of the race. Chandler Smith led the way on the restart on Lap 122.

Hocevar again used the restart to jump back into the lead. Chandler Smith got quickly back around on Lap 123 as Crafton moved into second.

On Lap 130, Chris Windom spun with a flat right-front tire, again placing the race under caution. The race returned to green on Lap 136.

Crafton grabbed the lead on the restart only to see Chandler Smith again power back to the front on Lap 137.

Brett Moffitt and Zane Smith both received damage in separate incidents on Lap 139 which placed the race under caution for the 10th time. Chandler Smith led the race on the restart with five laps remaining.

Right after the green, a 17-truck wreck erupted that briefly blocked the track and forced NASCAR to display a red flag to clear debris. Among the trucks involved were Creed, Donny Schatz, Chase Briscoe, Josh Berry and Tanner Gray.

The race went into a second, two-lap overtime with Chandler Smith still out front.

Once again a wreck involving three trucks brought out the caution shortly after the restart, sending the race into a third overtime. Chandler Smith stilled remained the leader.

Austin Hill edged ahead of Chandler Smith just as another wreck broke out on the restart to send the race to a fourth overtime. Hill led the way on this one.

For the second straight time, Kraus claimed the stage win under caution as a wreck with three laps remaining brought out a yellow.

Hocevar was second, Gilliland third, Crafton fourth and Enfinger rounded out the top-five.

Following the break between Stages 1 and 2, Schatz elected not to pit and inherited the lead. He led the way on the restart on Lap 41.

Gilliland went three-wide with Schatz and Kraus and grabbed the lead shortly after the restart.

On Lap 65, Jessica Friesen spun for the second time in the race and was hit afterward by Morgan Alexander to bring out a caution.

The race returned to green on Lap 73 with Gilliland out front followed by Hocevar and Kraus.

With 10 laps remaining in the stage, Gilliland maintained about a half-second lead over Kraus as Hocevar ran third.

On Lap 87, Brown spun just after Kraus reclaimed the lead and brought out a caution that ended the stage.

Kraus grabbed the lead on a restart with three laps remaining and secured the Stage 1 win when a caution was displayed on Lap 39 of 40.

Kraus started on the pole but was quickly overtaken by Sauter on Lap 3.

Hocevar moved into the lead on Lap 11 but a spin by Sauter in Turn 4 after contact with Briscoe put the race under caution on Lap 16.

The race returned to green on Lap 21 and Gilliland moved into the lead on the restart.

On Lap 31, Brown got spun to bring out another caution. The race returned to green on Lap 37 with Gilliland still in the lead.

Kraus moved back into the lead after the restart just before Friesen spun and brought the caution back out, which ended the stage.

John Hunter Nemechek started from the rear of the field because of a move to a backup truck following a wreck in practice.