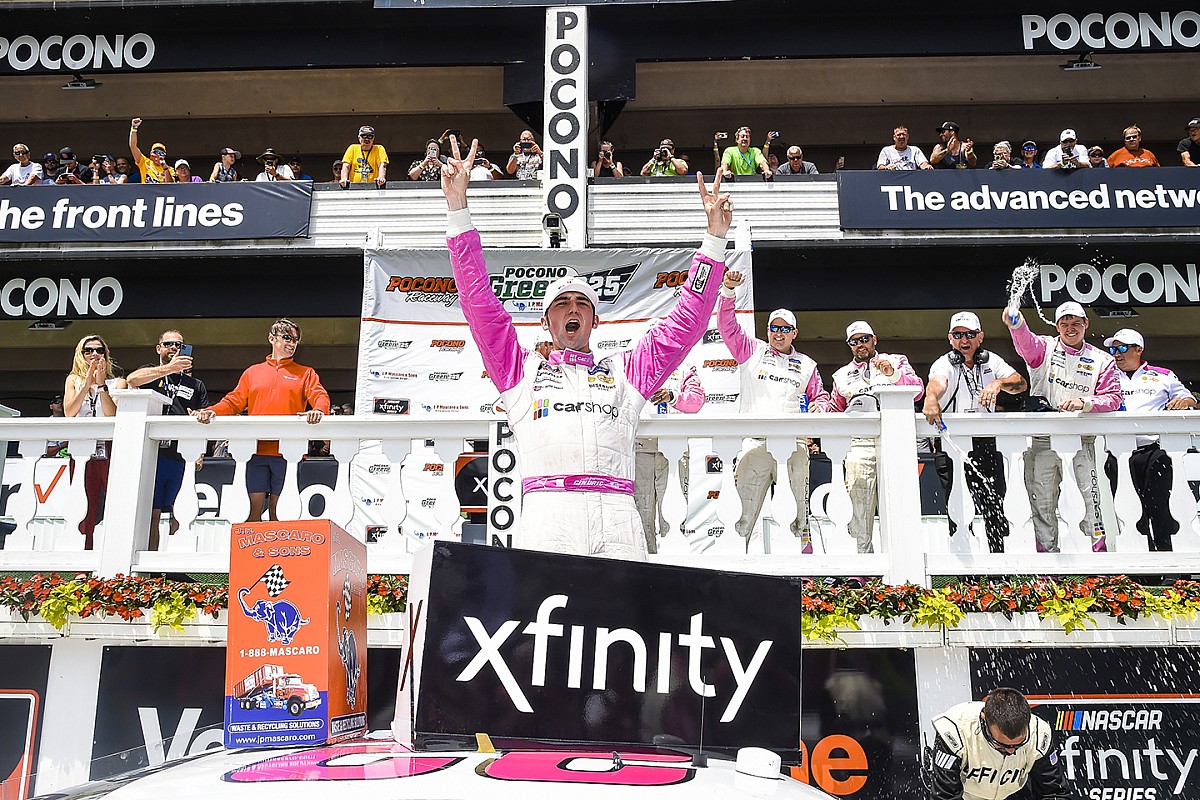 Cindric, the reigning series champion, emerged from a final round of green-flag pit stops with a more than 3-second lead over Gibbs.

In the final two laps, Gibbs’s No. 54 Toyota came to life and he closed to Cindric’s rear bumper but couldn’t attempt a pass before Cindric claimed the win Sunday at Pocono Raceway.

Cindric’s victory comes a week after a disappointing 32nd-place finish at Nashville. It’s also his 12th win of his career.

“I went from a 3-second lead to a half-second lead at the end. These things are never easy,” Cindric said. “I had to avoid two wrecks today. I’m so excited to see all these people back at the race track and excited to get back to Victory Lane.

“This track was on our kill list since last year and there’s a few more of those. So we’ll keep putting our heads down, we’ve got to keep getting better, we’ve got a lot of tough competition and a lot of racing left.”

Following the break between Stages 2 and 3, a handful of cars elected to pit but Gibbs stayed out and remained in the lead.

On the restart on Lap 45, Gibbs was followed by Gragson and Snider.

Riley Herbst spun in Turn 2 and hit the wall on Lap 46 to bring out a caution.

The returned to green on Lap 50 with Cindric out front followed by Gibbs, Gragson and Jeb Burton.

With 35 laps remaining, Allgaier was among the first of the lead-lap cars to pit under green for their final stop for tires and fuel to make it to the finish of the race.

With 20 laps to go, the top four cars – led by Hemric – still had to make a final pit stop. Cindric ran fifth, the first car that had completed its final pit stop of the race.

Hemric’s challenge for the lead went up in smoke when he was penalized for the second time in the race for speeding on pit road. He was forced to serve a pass-through penalty.

Once the cycle of stops was completed on Lap 75, Cindric moved back to the lead. He was followed by Gibbs and Allgaier.

With 10 laps remaining in the race, Cindric had built up a 3.2-second lead over Gibbs with Allgaier in third, 5.1 seconds behind the leader.

Gibbs held off Gragson in a two-lap shootout to take the Stage 2 win.

Jones was third, Snider fourth and Herbst rounded out the top-five.

Following the break between Stages 1 and 2, most of the lead-lap cars pit but Allgaier stayed out and inherited the lead.

On the restart on Lap 25, Allgaier was followed by Haley, Sam Mayer and Snider. Harrison Burton lined up 10th.

As the field exited Turn 1 on the restart, Mayer turned Justin Haley, who slammed the inside wall hard, then drifted back onto the track and was hit again by Ryan Vargas.

Haley got out of his car but immediately laid down on the track and NASCAR red-flagged the race. Haley eventually walked under his own power to the ambulance.

The red flag was lifted after nearly six minutes. Allgaier remained the leader when the race returned to green on Lap 29. He was followed by Snider, Hemric and Harrison Burton.

Hemric went to the inside of Allgaier and came away with the lead on the frontstretch on Lap 32.

On Lap 35, Harrison Burton got loose while racing with Allgaier, spun and backed into the outside wall to bring out a caution.

Several of the lead-lap cars pit with Cindric the first off pit road. Hemric was penalized for speeding on pit road and had to restart the race from the rear of the field. Gibbs remained on the track and took over the lead.

The race resumed on Lap 39 with Gibbs out front followed by Snider and Gragson.

Harrison Burton held off teammate Hemric to take the Stage 1 win, his second stage victory of the 2021 season.

Allgaier was third, Cindric fourth and Allmendinger rounded out the top-five.

Harrison Burton started on the pole and took early command of the race.

On Lap 11, Josh Williams spun and wrecked in Turn 1 after contact with Santino Ferrucci to bring out a caution.

The race returned to green on Lap 18 with Harrison Burton still in front followed by Hemric and Allgaier.