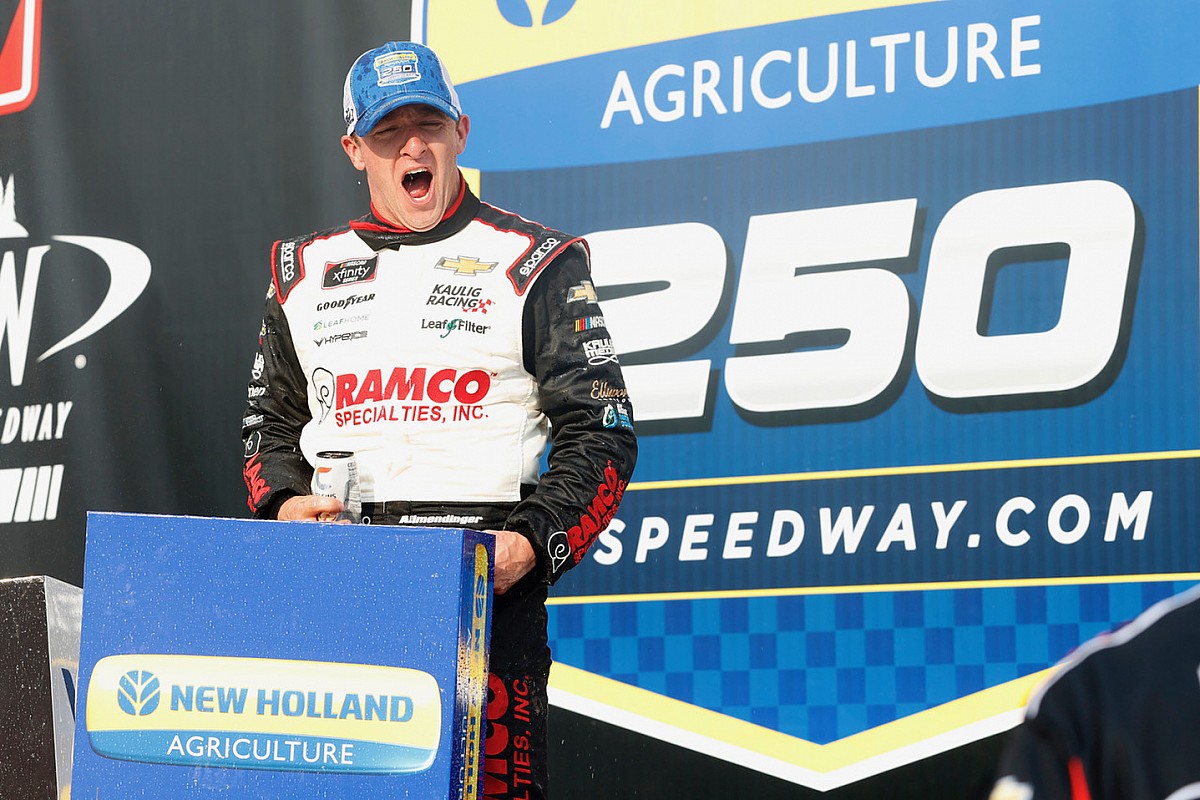 Allmendinger fended off charge after charge on three consecutive two-lap overtimes and finally came away with the win Saturday, holding off Brandon Jones for his third Xfinity Series win of the 2021 season.

On the final overtime restart, Allmendinger had Noah Gragson lined up alongside him and Jones behind him. Jones gave him a shove to clear for the lead but could not complete a pass for the lead him and with no wreck this time, the race was completed after 139 laps.

“What a hell of a six days, oh my goodness,” Allmendinger said at the start/finish line as the crowd roared its approval behind him. “This is what’s awesome, though, to have all the fans back.

“Indy last week was spectacular. Michigan, thank you, you guys make it fun. I’m more tired from the celebrations than the driving.”

The win is the second for Allmendinger on an oval this season (the other was Las Vegas) and the eighth of his Xfinity Series career.

As Allmendinger continued the interview with NBC Sports Network, the fans in the stands began chanting, “AJ! AJ! AJ!”

“That’s awesome. Thank you so much guys,” he said. “When you’re restarting on the front row, the outside was the place to be. The problem was you just got to hope you got pushed. Brandon Jones, thank you very much – he pushed me every time.”

Gragson ended up third, Josh Berry – substituting for Michael Annett – was fourth and Harrison Burton rallied from a lap down to round out the top-five.

Following the break between Stages 2 and 3, all the lead-lap cars pit with Allmendinger the first off pit road.

The race returned to green on Lap 67 with Allmendinger in the lead followed by Harrison Burton and Allgaier.

Harrison Burton was forced to pit under green on Lap 73 with a vibration in his right-front tire. He dropped to 32nd in the lineup when he returned to the track.

On Lap 87, Allgaier caught Allmendinger and got around him for the lead and while Allgaier and Allmendinger were still side-by-side on Lap 88, Berry went high and passed both to take the lead for the first time in the race.

With 30 laps to go, Berry had opened a 1.7-second lead over Allgaier as Allmendinger ran third.

Around Lap 103, several cars headed to pit road to begin a final round of green-flag pit stops to take on tires and fuel to finish the race.

Ty Gibbs received a pass-through penalty for an uncontrolled tire during his stop. During his stop, Allgaier elected to take fuel only.

On Lap 113, Allgaier emerged as the leader once the cycle of stops had been completed.

NASCAR threw the caution on Lap 116 for Jeb Burton’s Chevrolet, which stalled on the track before it could reach pit road.

Allgaier, Harrison Burton and Herbst all elected to pit for tires during the caution. When the race returned to green, Berry led the way followed by Jones and Allmendinger. Allgaier lined up sixth, the first car with four new tires.

On Lap 122, Jesse Little and Bayley Currey wrecked on the backstretch as Almendinger edged ahead of Berry to reclaim the lead.

The race headed to overtime with Allmendinger out front, followed by Jones, Berry, Gibbs and Gragson.

Mason Massey hit the wall entering Turn 1 and came to a stop on the track to bring out a caution and send the race into a second overtime.

To start the second overtime, Allmendinger was out front, followed by Jones, Gibbs, Berry and Moffitt.

Gibbs got loose in Turn 2 at the start of the second overtime and hit the wall, triggering an accident and sending the race into a third overtime. To begin the third overtime, Allmendinger was followed by Jones, Berry, Gragson and Herbst.

Allmendinger held off Gibbs to take the Stage 2 win, his eighth stage victory of the 2021 season.

Harrison Burton was third, Allgaier fourth and Jeb Burton rounded out the top-five.

Following the break between Stages 1 and 2, most of the lead-lap cars decided to pit with Allmendinger the first off pit road. Berry had to restart from the rear of the field for having a crew member over the wall too soon.

Jeb Burton stayed out and inherited the lead and led the way when the race went green on Lap 36. He was followed by Tyler Reddick and Allgaier. Austin Cindric lined up eighth.

On Lap 36, Myatt Snider drifted up the track in Turn 2 in front of Cindric and then into Brandon Brown to trigger a multi-car wrecked that did significant damage to cars of Cindric, Justin Haley, Wallace and Daniel Hemric.

“We just got collected in a wreck by the cars that decided to stay out. Unfortunately, that is something you see often in this series,” Cindric said. “It is enough that I am not going to complain about it, you just have to understand it is possible.

“We had some guys get loose and spin out and I couldn’t miss them.”

When the race resumed on Lap 46, Jeb Burton led the way followed by Reddick and Allgaier.

With 10 laps remaining in the second stage, Jeb Burton held a small lead over Allgaier as Allmendinger ran third.

Entering Turn 1 on Lap 54, Allmendinger got around Jeb Burton to move into the lead.

Cindric held off Gibbs on a restart with four laps remaining to take the Stage 1 win.

Allmendinger ended up third, Myatt Snider fourth and Gragson rounded out the top-five.

Cindric started on the pole but got loose in Turns 1 and 2 on the first lap as Allmendinger grabbed the lead.

On Lap 16, NASCAR displayed a competition caution to allow teams to check tire wear. A handful of cars pit but Allmendinger remained on the track and in the lead when the race returned to green on Lap 21.

After the leaders went 4-wide, Cindric powered back into the lead before Caesar Bacarella spun off the track to bring the caution back out.

A handful of cars pit including Allgaier, Jeb Burton and Wallace. Allgaier and Wallace were both penalized during their stops – Allgaier for an uncontrolled tire and Wallace for having a crew member over the wall too soon.

The returned to green on Lap 27 with Cindric out front, followed by Gibbs and Allmendinger.

Berry had to start the race from the rear of the field for late driver change in the No. 1 Chevrolet.