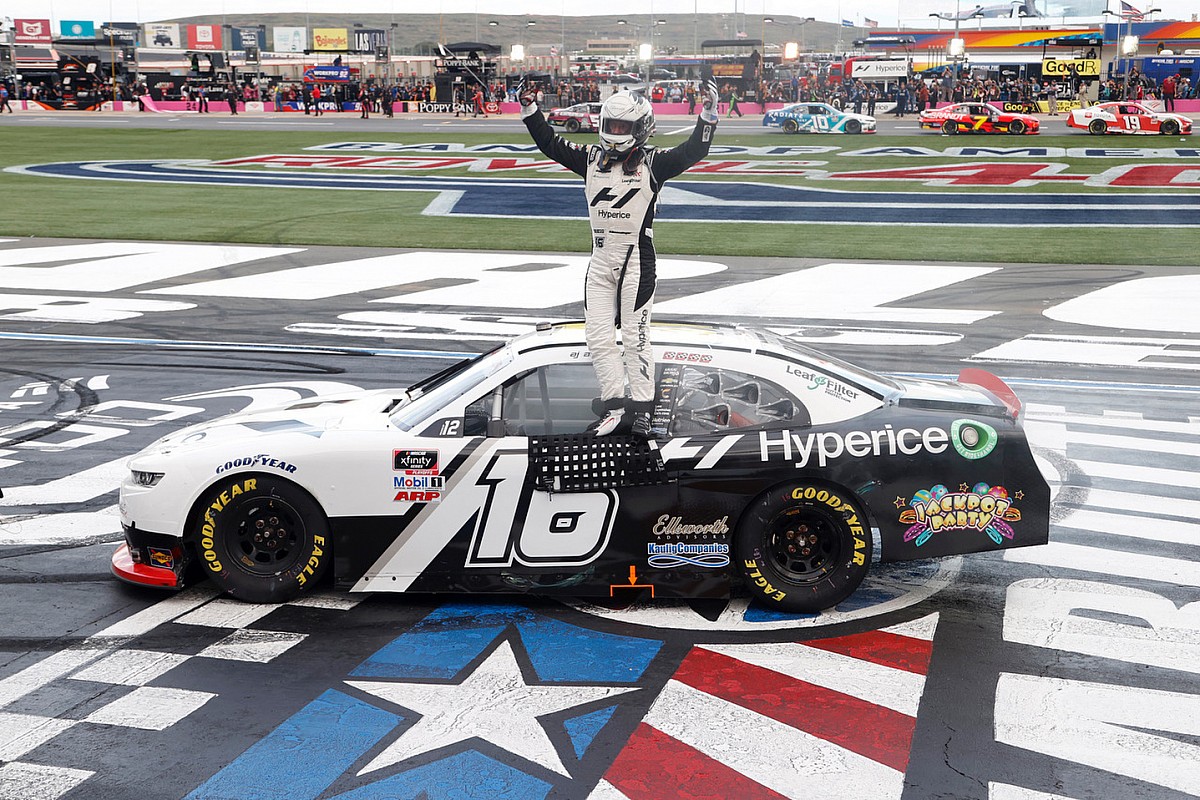 With three laps remaining in the 67-lap scheduled race, Allmendinger had built nearly a 9-second lead but when Tommy Joe Martins wrecked off Turn 14 on Lap 64, the field got one more chance.

Several lead-lap cars took on new tires and others – including Allmendinger – were close on fuel as the two-lap overtime got underway.

Allmendinger’s engine sputtered coming to the white flag, but he easily held off Austin Cindric by 3.192 seconds to clinch the win, his fifth of the 2021 season.

“I knew (the caution) was coming out. I knew it wasn’t going to go simple like that,” Allmendinger said. “We were kind of on defense early worrying about the points. This place was tough to pass – the track was really slick to begin with, obviously, from all the rain.

“This car was stupid fast. The big picture is the championship but getting another win – three in a row here at the Roval, it means the world to me.”

Asked about his engine sputtering as he took the white flag, Allmendinger said, “I felt it kind of stumble and I thought ‘You’ve got to be kidding me.’ This ECR motor had a lot of power and just enough fuel in it to win.”

Allmendinger’s win locked him into the semifinal round of the series playoffs, where he will be joined by Cindric, Daniel Hemric, Justin Allgaier, Justin Haley, Noah Gragson, Brandon Jones and Harrison Burton.

Hemric rallied from 13th to finish third in the race on new tires, Haley ended up fourth and Jones rounded out the top-five.

Following the break between Stages 2 and 3, a handful of lead-lap cars pit but Ty Gibbs stayed out and inherited the lead. The race returned to green on Lap 43.

Snider was assessed a pass-thru penalty on pit road for a restart violation.

With 20 laps remaining, Gibbs maintained a small lead over Allmendinger with Cindric up to third.

Gibbs blew the backstretch chicane on Lap 48, which allowed Allmendinger to take over the lead and Cindric to move into the second spot.

With 10 laps to go, Allmendinger had built a 4.4-second lead over Cindric with Sam Mayer third, Haley fourth and Hemric in fifth.

With five laps remaining, Allmendinger’s lead had grown to more than 9 seconds as Cindric, Mayer and Haley battled it out for second.

On Lap 66, Martins pounded the wall off oval Turn 4 and his badly damaged No. 44 limped down pit road. Several lead-lap cars elected to pit, and Hemric was the first off pit road among those who did.

Allmendinger stayed out and led the way on the overtime restart followed by Cindric and Mayer. Hemric lined up 13th.

Hemric held off a wild charge from Haley to take the Stage 2 win.

Snider was third, Gragson fourth and Clements rounded out the top-five.

Following the break between Stages 1 and 2, most of the lead-lap cars pit with Hemric the first off pit road. Cindric stayed out and inherited the lead.

On the restart on Lap 23, Cindric was followed by Mayer and Austin Hill. Hemric lined up fifth.

With 15 laps remaining in the second stage, Cindric held a small advantage over Mayer as Hemric had worked his way back to third.

On Lap 29, NASCAR put out a caution after Josh Bilicki went off track, tearing up part of backstretch chicane curbing and ripping the splitter off his No. 07 Chevrolet.

The race was red-flagged for nearly five minutes to allow safety workers to repair the damage to the track.

When the race resumed on Lap 33, Cindric led the way followed by Mayer and Hemric.

On Lap 36, NASCAR was forced to display another caution for debris on the frontstretch. Several lead-lap cars elected to pit with Gibbs the first off pit road.

The race returned to green on Lap 38 with Hemric out front.

Hemric secured the Stage 1 win under caution when Kris Wright broke the track bar on his car and came to a stop on the track on the final lap.

Cindric started on the pole and led the way until Sage Karam and Jade Buford wrecked off Turn 6 to bring out a caution on Lap 2.

The race resumed on Lap 5 with Cindric out front followed by Allgaier and Hemric.

The penalty allowed Hemric to move into the lead on Lap 8.

With 10 laps remaining in the stage, Hemric had built a more than 2-second lead over Cindric as Gragson ran third.

On Lap 11, NASCAR displayed a caution as Gray Gaulding stalled his No. 74 Chevrolet in the backstretch chicane and needed a push to pit road.

The race returned to green on Lap 14 with Hemric in the lead.

Annett had to start the race from the rear of the field for a driver change as Josh Berry was listed on the original entry list.