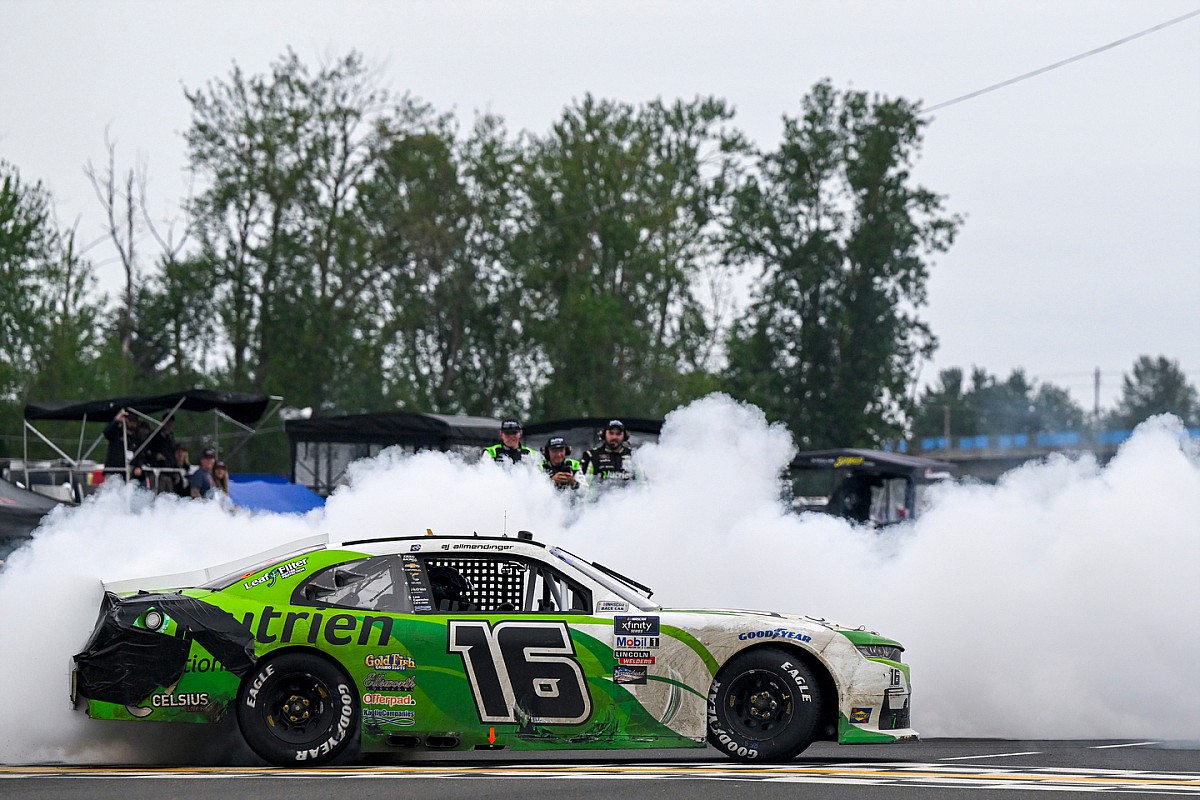 Allmendinger’s struggles started before the race had even begun. He ran off the wet course on the pace lap and had to make an unscheduled pit stop almost immediately after the green flag. He ended up off the course a few more times after that, and even fell a lap down.

It didn’t look like his day, but through attrition and multiple chaotic restarts, he clawed his way back to the front of the field and claimed victory for the 12th time in his NASCAR Xfinity Series career.

“All the men and women at Kaulig Racing deserved that. I was awful,” Allmendinger said post-race. “I crashed before the green. I was off the race track, I think four times. Yeah, made all kinds of mistakes and was all over the place, but just proud of everybody on (this team).

“I was melting down in the car honestly, making so many mistakes and trying so hard. I put so much pressure on myself at these races because I know what everybody expects. I know what I expect, more importantly. It might be one of the craziest wins I’ve ever had. Most mistakes ever to win a race for sure.”

He led just six laps in what would be the eighth road course victory of his NASCAR career. Eight of them have come in the Xfinity Series and two in Cup.

Anthony Alfredo led the field on the initial start, but it didn’t last long as he went straight off in the first chicane as drivers battled the damp track conditions.

Gibbs quickly asserted himself as the driver to beat, pulling out to a massive lead over Sheldon Creed.

While several competitors had off-track excursions, it actually took 12 laps before the first full-course caution when Sam Mayer crashed.

Hill then made a brief challenge for the race lead, but Gibbs was able to pull away once more. The off-tracks continued, but the race remained green for the remainder of the stage.

Mosack had a go at his Joe Gibbs Racing teammate on the restart that followed, but failed to complete the pass.

The next caution was for debris as too much mud and grass got pulled onto the race track. Under caution, a bizarre incident took place as Jesse Iwuji ran into race leader Gibbs, sending the No. 54 Toyota spinning through the Turn 1 chicane. Gibbs luckily escaped the encounter unscathed, and Iwuji was parked for two laps in response to the collision.

The complexion of the race changed dramatically on the next restart. Gibbs sent Gragson spinning into the grass as they fought for the lead, only to end up off-track himself along with Creed later in the same lap.

Suddenly, Andy Lally was in control of the race. He held on for several laps before Snider took over, winning the second stage.

For the final stage, most of the field jumped onto slick tires. Snider remained in control through a series of cautions which resulted in heavy damage for early contender Creed, ending his race. After exiting his race car, he made his displeasure with fellow driver Jade Buford known, displaying two middle fingers.

Allmendinger took the lead from Snider on the run that would follow, before yet another pile-up brought the field back behind the pace car.

Most of the field took the opportunity to get back on wet-weather tires as the rain returned. Buford and Yeley stayed out, but would both fall back as the leaders went four-wide into Turn 1.

Allmendinger and Snider surged ahead as chaos ensued behind them. When the caution flag was displayed, it was Snider in the race lead. However, he could hot old off the veteran as Allmendinger would quickly dispatch him on the final restart and drive off with the victory.