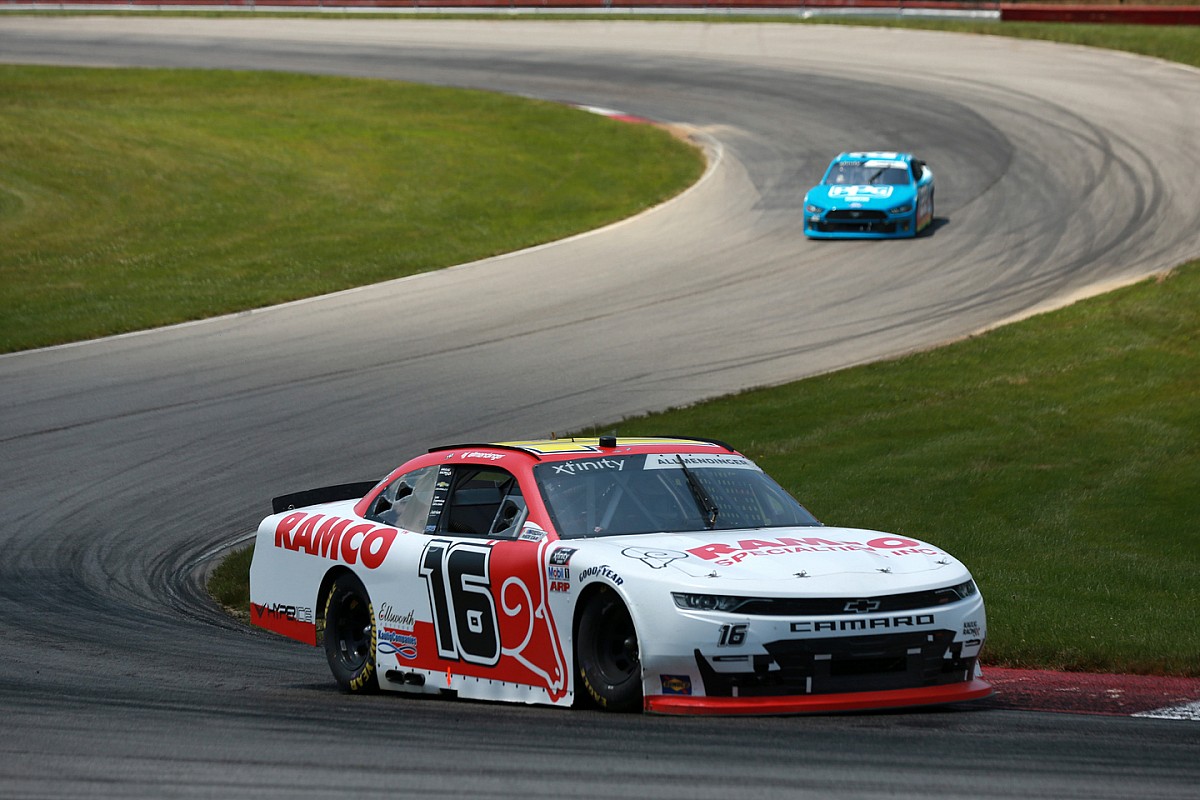 It seemed as though Austin Cindric had the victory within his grasp as he led the race with seven laps to go, over ten seconds clear of the field.

However, the stranded car of Jeb Burton brought out a caution and forced a restart.

Allmendinger made an aggressive move to the inside entering Turn 1, taking the leaders three-wide. The pass was completed cleanly, but contact ensued soon after behind the eventual race winner.

Cindric would go spinning off track, dashing his hopes of a race win. Soon after, a three-car incident would result in yet another caution which pushed the race into overtime.

Brett Moffitt was in a strong position to challenge for the race win, set to restart on the front row when disaster struck. The car stalled and he fell to the tail of the field.

Back at the front, Allmendinger and teammate Justin Haley were able to keep Ty Gibbs at bay and secure a 1-2 finish for the team, despite some rather noticeable left front damage on Haley’s car.

It was Allmendinger’s seventh career NXS win and his second of the 2021 season.

“This is (team owner) Matt Kaulig’s ‘Super Bowl’. Every win is important, but we know how important this race track and the community in northeast Ohio is to him and all the charity work that he does and all the companies that he works with,” Allmendinger said.

“It’s a special place for Matt and because of that I put a little bit more pressure on myself to try to win the race. We came with a little bit different set-up that we’ve not tried in the past. It was awesome. There was so much speed.

“With the pit penalty, I knew with no yellows we weren’t going to win just because (Cindric) was so far out there. I was going to get to second. Once that restart was happening, I made a decision coming to the green that I was either going to win or I was going to crash. It worked out the right way.”

The race got off to a slow start when Noah Gragson ended up off track, sustaining race-ending nose damage. He would not be the only one who ended up out of the race in the opening stage with Harrison Burton’s race ending in an off-track excursion as well.

The second caution of the race came when Tommy Joe Martins car went up in smoke.

Several cars, led by Gibbs opted to pit short of the stage-end in an effort to gain track position.

Gibbs inherited the lead for the start of the second stage. Cindric and Allmendinger fought their way back through the field until a caution with ten laps to go in the stage for the stalled car of Clements.

Cindric took the opportunity to pit as most of the leaders stayed out.

Allgaier also went behind the wall with his own issues, continuing a difficult day for JR Motorsports.

Allmendinger was able to take the lead from Gibbs on the restart, but both replicated their Stage 1 strategy and pitted short of the green-and-white checkered flag. Many cars did the same, leaving Justin Haley to claim the stage win.

A penalty for Allmendinger forced him to start from the rear of the field as the final stage got underway. Cindric led the way and drove away from the competition, amassing a massive lead as Allmendinger cut through the pack.

Cindric led Gibbs by nearly 11 seconds when the race-altering yellow for a stranded car changed everything just seven laps shy of the finish. At the time, Allmendinger had fought his way back up to third.

Allmendinger led 23 laps on his way to the race win. Cindric led the most laps at 30, but finished a disappointing 14th after his late-race incident.