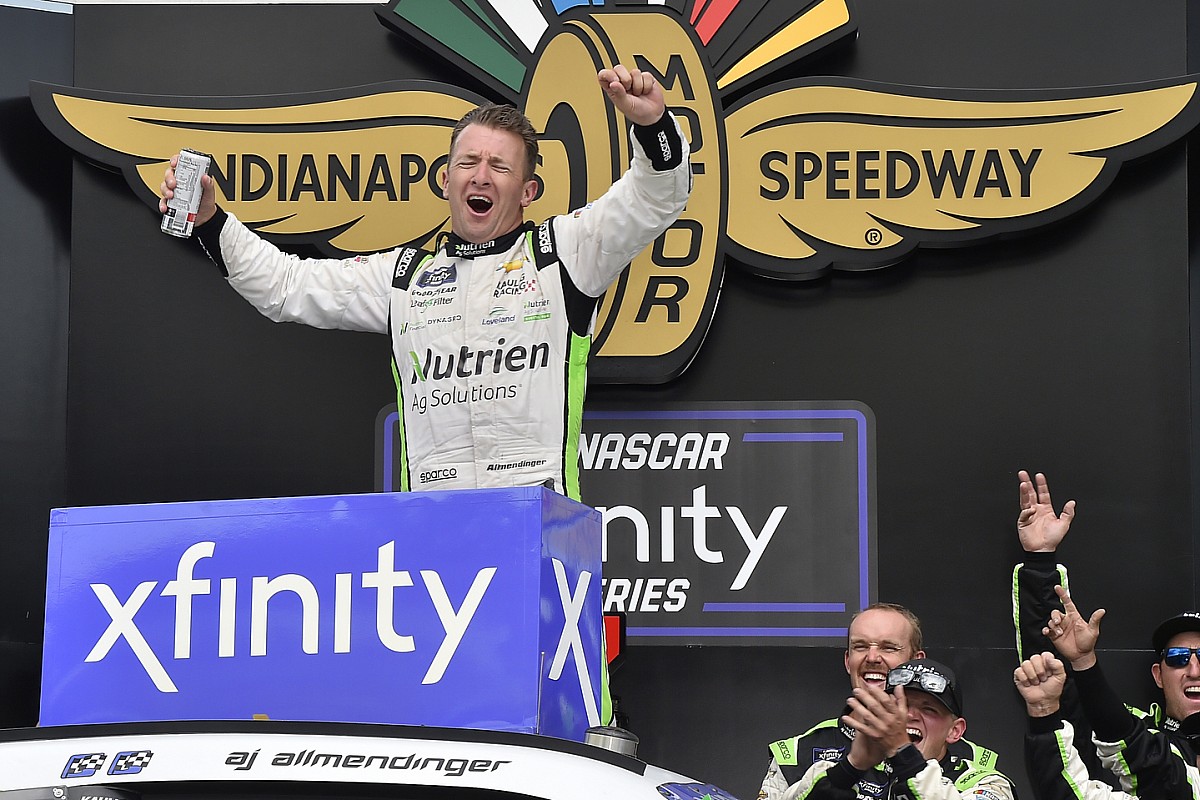 Despite an early-race setback on pit road that set him back in the field, Allmendinger rebounded and led a race-high 42 of 62 laps.

Allmendinger reclaimed the lead for the final time on a restart on Lap 45 and cruised to a 2.084-second win over Cup Series regular Alex Bowman.

The win is Allmendinger’s third of the year and all have come on road courses (his other wins were at Circuit of the Americas and Portland). It’s also the 13th victory of his career.

“God, I love this place. Indy, baby! Let’s go,” Allmendinger said. “I can’t thank everybody at Kaulig Racing, all the men and women, enough. We struggled, we worked hard to get a little bit better. I knew Bowman was really good on the long runs so I tried to gap him as much as I could. God, I love Indy.

“We win and lose as a team but I knew the way our car was set up, it was not very good in traffic. We had a little bit of a brake issue, too. The guys recovered really well. I was just frustrated because we gave up stage points a little bit there as well.

“But at this point, points don’t mean a damn thing. We’re kissing the bricks!”

Justin Allgaier fought a wild battle with Ross Chastain to finally claim third place on the final lap while Chase Briscoe rounded out the top-five.

Following the break between Stages 2 and 3, several lead-lap cars pit but Bowman was among those who stayed out and inherited the lead.

Daniel Hemric was penalized for speeding on pit road while Andy Lally, Jeremy Clements and Gibbs were penalized for commitment line violations. All had to restart from the rear of the field.

When the race resumed on Lap 45, Bowman was followed by Allmendinger, Allgaier and Sheldon Creed.

Allmendinger cleared Bowman in Turn 1 to return to the lead.

On Lap 47, Creed briefly spun off course after contact with Chastain but no caution was called.

With 10 laps remaining, Allmendinger opened up a 3-second lead over Bowman as Chastain ran third, more than eight seconds behind the leader.

Briscoe got around Chastain and moved into the third position on Lap 54.

With five laps to go, Allmendinger remained ahead of Bowman by 2.5 seconds as Chastain moved back into third.

With many teams electing to pit under green before the stage break, Josh Berry stayed out and easily claimed the Stage 2 win over Alex Labbe.

Following the break between Stages 1 and 2, a handful of cars elected to pit but Bowman stayed out and inherited the lead.

On the restart on Lap 25, Bowman was followed by Allgaier, Herbst and Gibbs.

Gibbs spun in Turn 1 after contact with Berry but was able to get straightened out as Allgaier moved into the lead. Later in the lap, Berry spun out Herbst.

NASCAR was forced to display a caution on Lap 27 for a large piece of metal that ended up on the track in Turn 1.

Gragson was forced to pit under green to repair damage to his left-front splitter. The race resumed on Lap 29 with Allgaier out front, followed by Bowman and Allmendinger.

Allmendinger quickly powered back to the lead on the restart in Turn 1.

With five laps remaining in the stage, a handful of teams elected to make green-flag pit stops, to take new tires and fuel to make it to the finish of the race.

Gragson held off Myatt Snider in a two-lap dash to the finish to claim the Stage 1 win.

Bowman was third, Allgaier fourth and Herbst rounded out the top-five.

Allmendinger started on the pole and cleared Gibbs off Turn 4 on Lap 1 to take early command of the race.

Labbe was forced to pit under green on Lap 6 after twice locking up his front tires in turns on the course.

With 10 laps remaining in the stage, Allmendinger had opened a 2.7-second lead over Gibbs as Bowman ran third.

Bubba Wallace was forced to pit on Lap 10 under green as his No. 18 Toyota was overheating. He got four new tires and had some tape removed from the grille.

On Lap 15, Parker Kligerman spun and wrecked into Ryan Ellis in Turn 7 and both cars ended up stuck off the course, which brought out a caution.

Most lead-lap cars pit with Gibbs the first off pit road. Allmendinger had a slow stop as his car fell off the jack. Briscoe had to restart from the rear of the field due to a commitment line violation.

Gragson was among those who stayed out and led the way on the restart with two laps to go. He was followed by Snider and Gibbs.

The following drivers had to start the race from the rear of the field: Brandon Brown, Kligerman, Grala, Austin Dillon, Anthony Alfredo, Brandon Jones, Bayley Currey, Briscoe and Miguel Paludo.

Jeb Burton had to take his No. 27 to the garage just before the green flag due to an issue with the track bar in his car. He never completed a lap.