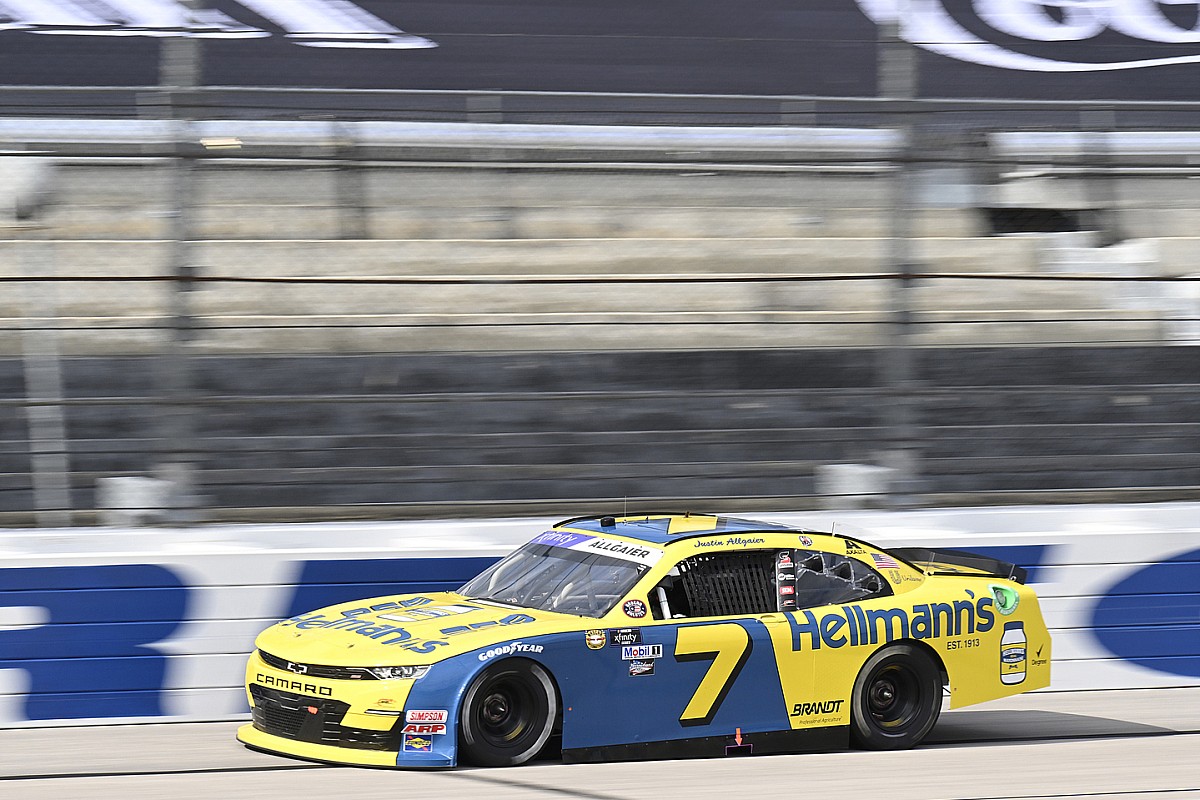 It was Allgaier’s 17th career NXS victory and his second at the iconic South Carolina race track. But it was far from easy.

After battery issues before the green flag, the team scrambled to replace it before the race began. He then had to start at the rear of the field, but was able to quickly charge to the front.

The race ended in a two-lap sprint where Allgaier, on fresher tires, was able to overtake AJ Allmendinger for the race win.

There were nine cautions during the event, including two stage breaks. Six different drivers led at least a lap and there were 13 lead changes.

Gibbs led much of the early laps ahead of Gragson. Eventual race winner Allgaier rapidly fought his way through the field.

Timmy Hill brought out the first caution of the race, spinning off the nose of Bayley Currey. Reddick nearly lost a lap as his team was forced to repair some fender damage, but he managed to stay on the lead lap.

Dragon was able to snatch the lead from Gibbs on the restart, prevailing via the inside line. His time out front did not last long, however, as Gibbs reasserted his position at the front of the field.

Jeb Burton then slowed with an issue and spun trying to enter pit road, forcing another yellow.

The restart that followed was a replay of its predecessor as Gragson again prevailed from the inside line. Gibbs actually fell back to third for a time with Allmendinger making a brief challenge for the lead.

Gragson would win the stage ahead of Gibbs, Berry, Allgaier, and Herbst. Allmendinger fell back to sixth, followed by Sieg, Cassill, R. Truex, and Nemechek.

Allgaier, who made big gains in the opening stage, won the race off pit road and grabbed the race lead.

He remained in control after the restart, an impressive rally for the JR Motorsports driver after starting dead last.

The next caution flew for Myatt Snider spinning down the track. Gragson continued to impress with his restart prowess, taking P1 from his teammate. Gibbs also found a way around Allgaier.

Brandon Brown stalled on track, which caused the stage to end behind the pace car.

It was another stage win for Gragson. He led Gibbs, Allgaier, Nemechek, Reddick, Berry, Mayer, Allmendinger, R. Truex, and Herbst.

Allgaier’s pit road once again delivered him the race lead as he won the race off pit road for the second time during the race. He held on through the restart with just over 50 laps remaining in the event.

Gibbs began to drop further back as Nemechek powered around the outside of the JGR star.

With 27 laps to go, a debris caution reset the field for a sprint to the finish. The restart that followed was a game-changer as Josh Berry surged into the race lead.

Unfortunately, it was too good to be true. He was penalized by NASCAR for jumping the restart and had to come down pit road for a drive-through.

With 12 to go, a caution for Joe Graf Jr. put the field in a difficult position. Most chose to pit for fresh tires, but about eight drivers stayed out.

Reddick led the way, but lost the lead to Allmendinger on the restart with just seven laps to go. He then found the wall, forcing yet another caution.

Allgaier and Gragson had already found their way back into the top-five, leaving Allmendinger incredibly vulnerable on those older tires.

The race ended in a two-lap dash and Allgaier quickly jumped back into the lead. Gragson tried to close in, but he could not make up the ground needed to challenge his teammate.

At the back-end of the top-ten, Truex and Clements collided, crashing just before the finish line.