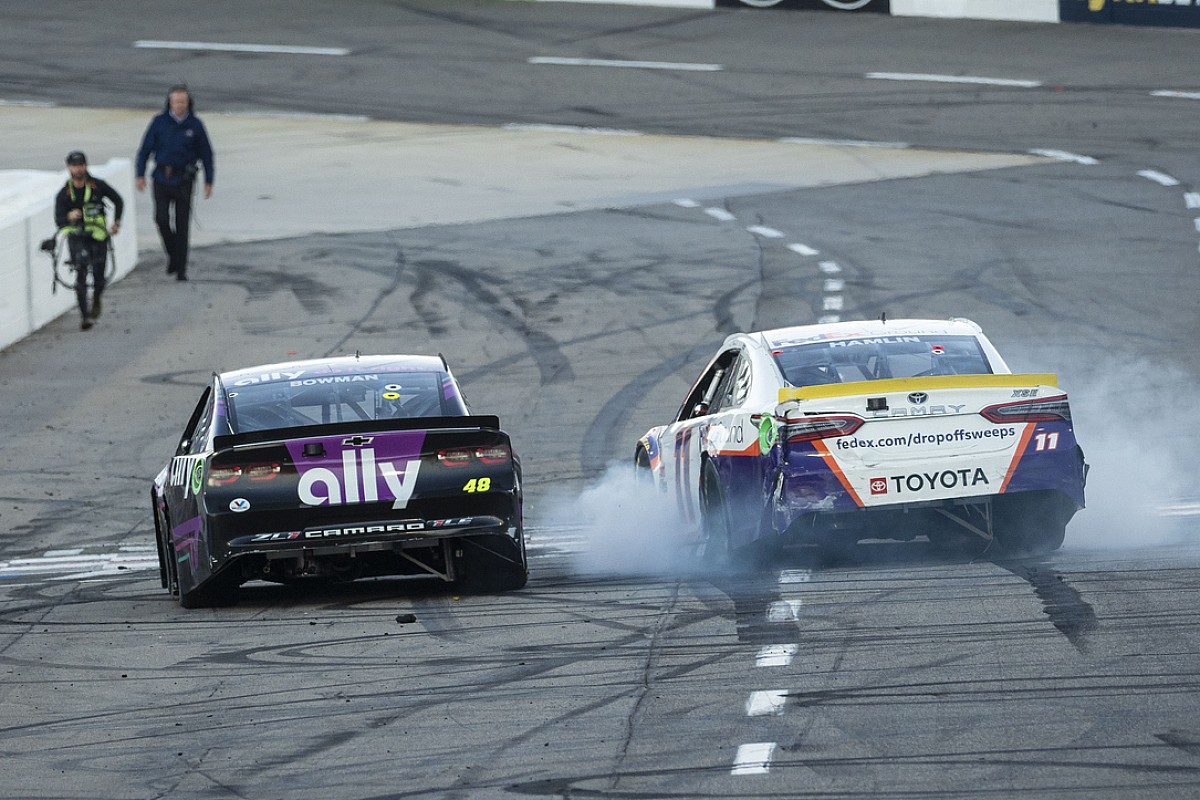 In the closing 25 of 501 laps, Bowman and battled side-by-side multiple times for the lead until Bowman got loose and knocked Hamlin up the track and into the wall in Turn 3 on Lap 494.

From there, Bowman easily cleared for the lead on the final restart as the playoff contenders all tangled behind him, claiming his fourth win of the 2021 season. Busch finished second but got wrecked by Brad Keselowski as the race ended.

Bowman began a victory burnout celebration on the frontstretch only to see Hamlin drive his No. 11 Toyota into the middle of it and at one point the two cars faced off nose-to-nose.

“I just got loose in. I got in too deep, knocked him out of the way and literally let him have the lead back. For anybody that wants to think I was trying to crash him, obviously wasn’t the case considering I literally gave up the lead at Martinsville to give it back to him,” Bowman said.

“He’s been on the other side of that. He’s crashed guys here for wins. I hate doing it. Obviously, I don’t want to crash somebody. I just got in, got underneath him, spun him out.

“Regardless, we get a free grandfather clock, which is pretty special. I struggled here for a long time. Obviously, like I said, hate we wrecked (Hamlin).”

Said Hamlin as he was being drowned out by boos from the crowd: “He’s just a hack. An absolute hack. He gets beat by his teammates every week. He’s just terrible.”

Hamlin and Chase Elliott advanced to next weekend’s Championship 4 at Phoenix on points, while Kyle Larson had already earned a spot by virtue of his wins the last two weeks at Kansas and Texas.

Martin Truex Jr rallied in the final two laps to earn a fourth-place finish in the race, which gave him the final spot in the Championship 4 by three points over Kyle Busch.

Keselowski ended up finished third in the race, Truex fourth and William Byron rounded out the top-five.

Following the break between Stages 2 and 3, the lead-lap cars all pit with Chase Elliott the first off pit road. Kyle Busch was penalized for speeding and had to restart the race from the rear of the field.

On the restart on Lap 270, Elliott was followed by Bowman, Hamlin and Almirola.

Corey LaJoie and Josh Bilicki made contact on Lap 310, which sent Bilicki for a spin and brought out a caution.

The lead-lap cars all pit with Elliott the first off pit road. On the restart on Lap 320, Elliott was followed by Hamlin, Bowman and Byron.

Bilicki hit Quin Houff and drove him into the Turn 4 wall on Lap 323 which brought out caution. Under the caution, Houff spun Bilicki but was penalized for five laps for the retaliation.

The race returned to green on Lap 330 with Elliott still in command.

Ross Chastain and Ryan Newman made contact on Lap 339 which brought out the eighth caution of the race. Several lead-lap cars pit but Logano remained on the track and inherited the lead. Elliott was first off pit road among those who pit.

On the restart on Lap 346, Logano was followed by Elliott, Bowman and Truex.

Logano’s stint out front didn’t last long as Elliott was able to power around him and reclaim the lead on Lap 351.

Cole Custer spun off Turn 4 on Lap 358 to bring out a caution. A few laps earlier, Truex’s No. 19 had begun pushing water and in danger of overheating.

The race returned to green on Lap 363 with Elliott leading the way.

The 10th caution of the race came out on Lap 379 after Daniel Suarez spun off Turn 2. Most lead-lap cars decided to pit with Elliott the first off pit road.

Larson was penalized for speeding and had to restart the race from the rear of the field. DiBenedetto was penalized one lap for pitting outside his box.

The race resumed on Lap 385 with Austin Dillon out front – he was among a group of cars that stayed out. Elliott lined up sixth.

Truex powered to the lead on Lap 386 as Hamlin moved into second. On Lap 389, Hamlin got around Truex to take the lead for the first time in the race.

With 75 laps to go, Hamlin maintained about a 1-second lead over Truex as Bowman ran third and Elliott fourth.

Dillon wrecked on Lap 436 to being out the 11th caution of the race. The lead-lap cars all pit with Hamlin the first off pit road.

The race returned to green on Lap 444 with Hamlin out front, followed by Bowman, Elliott and Truex.

Racing for the third position entering Turn 3, Keselowski got into Elliott and sent him for a spin to bring out a caution. Truex, who had developed a tire rub, and Elliott both decided to pit.

On the restart on Lap 461, Hamlin led the way followed by Bowman, Keselowski and Byron. Elliott lined up 21st.

Shortly after the restart, Ricky Stenhouse Jr. and Bubba Wallace were involved in an incident, which sent Stenhouse for a spin. The race resumed on Lap 467 with Hamlin still in the lead.

With 31 laps to go, Keselowski got around Bowman and moved into second.

The 14th caution of the race was displayed on Lap 473 as Truex got knocked into the wall and Stenhouse was involved in a wreck.

The returned to green on Lap 478 with Hamlin out front followed by Keselowski, Bowman and Byron.

Bowman powered to the lead after the restart only to see Hamlin reclaim it on Lap 479.

On Lap 494, Bowman, while racing for the lead, knocked Hamlin up the track and into the wall, which brought out a caution and locked Bowman into the race lead.

The incident sent the race into two-lap overtime with Bowman out front, followed by Kyle Busch, Keselowski, Byron and Almirola.

Elliott held off teammate Bowman by 1.7 seconds to take the Stage 2 win and clinch his spot in the Championship 4 on points.

Byron was third, Truex fourth and Hamlin rounded out the top-five.

Following the break between Stages 1 and 2, all the lead-lap cars pit with Larson the first off pit road. Larson, however, was penalized for speeding and had to restart the race from the rear of the field.

On the restart on Lap 141, Elliott led the way followed by Truex, Kyle Busch and Keselowski.

With 75 laps remaining in the second stage, Elliott had opened up a nearly 1-second lead over Truex while Byron ran third.

On Lap 197, Dillon had a right-front tire go down and ran up the track and into the wall to bring out a caution.

All lead-lap cars pit with Truex the first off pit road. He led the way on the restart on Lap 204 followed by Elliott and Byron.

On Lap 205, Elliott got around Truex on the outside and returned to the lead.

With 20 laps to go in the stage, Elliott maintained a 1.2-second lead over Bowman as Byron ran third.

Elliott held off his teammate Larson to take the Stage 1 win.

Truex was third, Byron fourth and Keselowski rounded out the top-five.

Larson started on the pole and led the first 55 laps until Elliott got around him off Turn 4 to take the lead on Lap 56.

NASCAR displayed a competition caution on Lap 62 to allow teams to check for tire wear. All the lead-lap teams pit with Larson the first off pit road. Hamlin was penalized for speeding and had to restart from the rear of the field.

On the restart on Lap 68, Larson was followed by Elliott and Truex.

Ryan Newman, Michael McDowell and Suarez made contact and wrecked off Turn 4 on Lap 72 to bring out a caution. The race resumed on Lap 77 with Larson still in command.

On Lap 85, Elliott got back around Larson to reclaim the lead as Truex ran third and Byron fourth.

With 25 laps remaining in the first stage, Elliott had built a nearly 1-second lead over Larson with Truex in third, more than 3 seconds behind the leader.

Hamlin’s No. 11 Toyota failed pre-race inspection twice and he was forced to start the race from the rear of the field.