Alex Bowman returns No. 48 to NASCAR Victory Lane at Dover 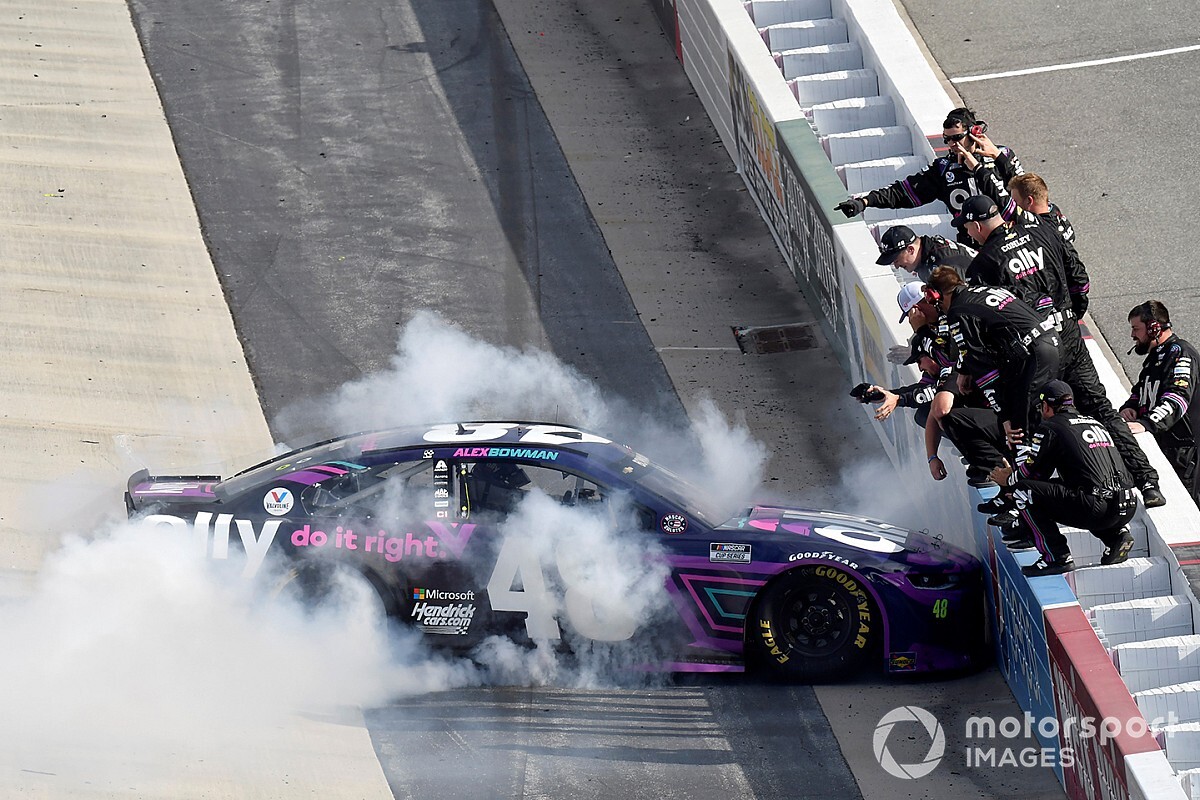 Seven-time NASCAR Cup Series champion Jimmie Johnson won 11 times at Dover (Del.) International Speedway in the No. 48 and turned the reigns over to Bowman when he stepped away from NASCAR racing at the end of the 2020 season.

Bowman, grabbed control of the race on a round of pit stops on Lap 304 of 400, and never relinquished it, holding off teammate Kyle Larson by 2.017 seconds at the finish to win the Drydene 400.

The win is Bowman’s second of the season and fourth of his career. This is also the first season in his Cup career with multiple wins.

HMS teammates Chase Elliott and William Byron finished third and fourth, respectively, as HMS finished 1-2-3-4 for the first time in its existence. Together, the four drivers led 382 of the 400 laps.

“I can guarantee you this is the most nervous I’ve been at a race,” team owner Rick Hendrick said.

HMS also picked up win No. 267, and now trail Petty Enterprises by one of most-ever by an organization in NASCAR history.

Following the break between Stages 2 and 3, all lead-lap cars pit and again Larson was the first off pit road.

When the race returned to green on Lap 249, Larson was followed by Bowman, Elliott, Byron and Kurt Busch.

On Lap 302, Aric Almirola appeared to have a right-front tire go down and slammed the Turn 3 wall hard. The right-front wheel well erupted into flames after the incident.

“That one hurt,” Almirola said over his team radio after the hit. He gingerly walked to the ambulance for a ride to the infield care center. Almirola was later evaluated and released from the care center.

“My body’s hurting,” Almirola said after he left the care center. “It doesn’t want to take any more hard hits like that.”

All the lead-lap cars pit with Bowman the first off pit road. When the race returned to green on Lap 309, Bowman was followed by Larson, Elliott, Byron and Harvick.

Anthony Alfredo wrecked off Turn 2 on Lap 314 after contact from Ricky Stenhouse Jr. to bring the caution out for the sixth time.

Several lead-lap cars elected to pit but Bowman was among those who remained on the track and continued to lead the way on the restart on Lap 320.

NASCAR displayed the caution on Lap 325 for debris on the frontstretch of the track. The leaders remained on the track and Bowman led the way on Lap 331 followed by Larson, Elliott and Harvick.

With 50 laps to go, Bowman maintained a small lead over Larson while HMS drivers returned to running 1-2-3-4.

Larson held Elliott at bay throughout the entire stage and hung on for the Stage 2 win, completing a sweep of both stage victories.

Following the break between Stages 1 and 2, the lead-lap cars all pit with Larson the first off pit road. Martin Truex Jr.’s team made an extended stop and went under the hood to examine the engine.

When the race returned to green on Lap 130, Larson was followed by Hamlin, Elliott, Blaney and Logano.

Ricky Stenhouse Jr. was forced to pit under green on Lap 150 after complaining about a vibration.

With 75 laps to go in the second stage, Larson maintained a small but steady lead over Elliott while Ryan Blaney ran third, Hamlin fourth and Harvick fifth.

On Lap 171, Josh Berry hit the wall and fell off the pace, which forced NASCAR to display the caution. All lead-lap cars pit with Larson once again the first off pit road.

When the race returned to green on Lap 177, Larson was followed by Elliott, Hamlin, Harvick and Byron.

With 50 laps remaining in the stage, Larson held a half-a-second lead over Elliott, while Hamlin ran third, 2.7 seconds behind the leader.

On Lap 225, Elliott had closed to almost the rear bumper of Larson’s car as the four Hendrick Motorsports cars ran 1-2-3-4.

With five laps to go, Larson pushed his lead back to almost a second over Elliott.

A caution on the last lap of the stage after Chase Briscoe hit the wall sealed Larson’s Stage 1 win.

Hamlin was second, Blaney third, Elliott fourth and Harvick rounded out the top-five.

Truex, who started on the pole, led the first 15 laps until Byron powered around him to grab the top spot on Lap 16.

Around Lap 25, Kyle Busch began fading back through the field and said over his radio he believed he had an engine issue.

On Lap 36, NASCAR displayed a competition caution to allow teams to check tire wear. All the lead-lap cars pit, with Larson the first off pit road. Both Reddick and McDowell were penalized for speeding on pit road and had to restart the race from the rear of the field.

The race resumed on Lap 41 with Larson out front followed by Byron, Harvick and Hamlin.

With 50 laps remaining in the first stage, Larson had opened up a 1.8-second lead over Harvick while Byron ran third.

On Lap 71, Corey LaJoie was forced to pit under green for a flat right-front tire.

With 20 laps to go, Larson’s lead over Harvick had expanded to 5.2 seconds while Byron remained in third.

Elliott, who started from the rear of the field, enters the top-five for the first time with five laps remaining to go in the stage.

Three drivers – Berry (driver change), Ryan Newman (unapproved adjustments) and Elliott (multiple pre-race inspection failures) – had to start the race from the rear of the field.