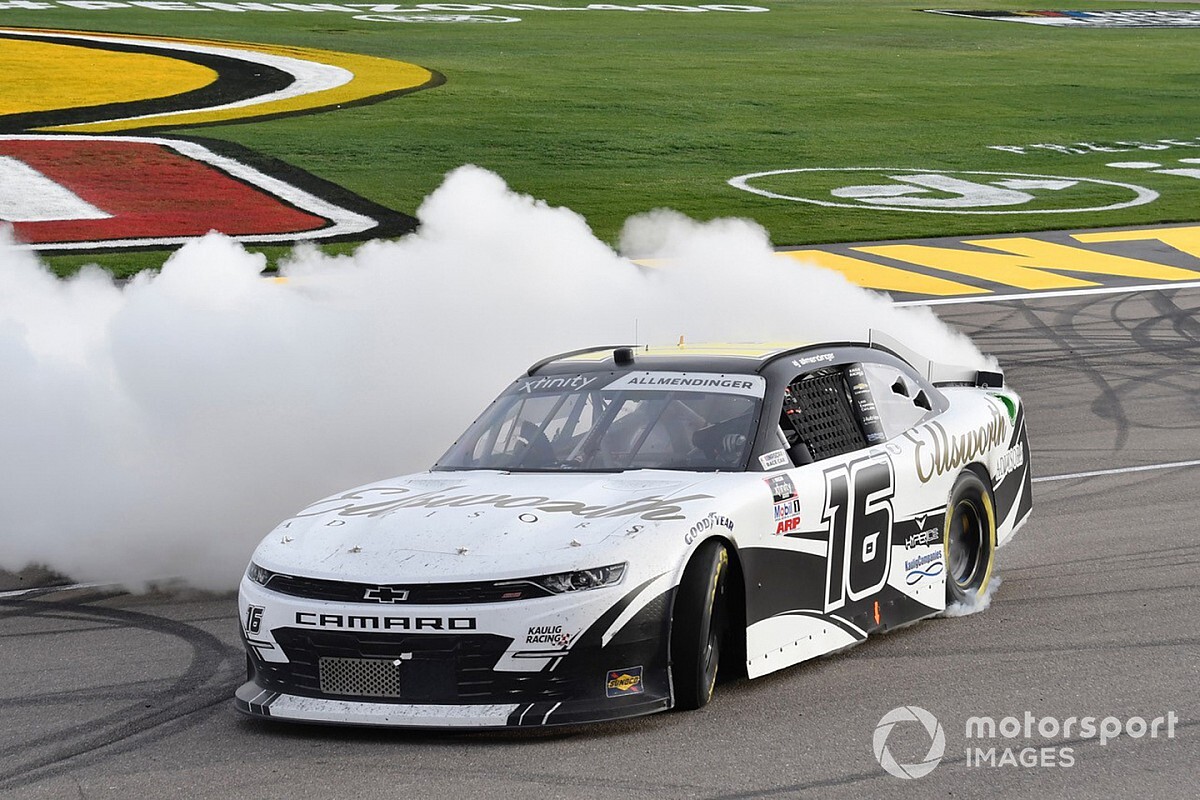 A late-race caution bunched the field and left Daniel Hemric in the lead Saturday at Las Vegas Motor Speedway, but Allmendinger ran Hemric down in three corners after the restart to reclaim the lead.

He ended up holding off Hemric by nearly a second to win Saturday’s Alsco 300 – his first series win of the 2021 season and sixth of his career.

Allmendinger is running fulltime in the Xfinity Series this season for Kaulig Racing in the No. 16 Chevrolet and the win virtually locks him into the series playoffs just four races into the season.

“First of all, it’s awesome to have you all back in the granstands,” Allmendinger said to the crown on hand. “That’s the most important thing. Without all of you and all of you at home we can’t do this. So, thank you so much for showing up.

“It’s emotional because – hell – you don’t know when you’re going to do this again. It could be the last one. I hope it’s not. I think we can do a lot more. I don’t take it for granted.

“We’ve put so much effort into getting these cars better and it’s shown the first four weeks. I want to win so bad for Matt (Kaulig, team owner) each week. It’s hard to put into words what it means to me and truly how bad I want to win for him.”

Asked about his last restart, Allmendinger said, “I knew if I could clear (Hemric) all I had to do was hold him off for a couple corners. Once I got clean air, it was doing everything I could to nail every corner.”

Brandon Jones was third, Austin Cindric was fourth and Noah Gragson rounded out the top-five.

Following the break between Stages 2 and 3, the lead-lap cars all pit with Jones the first off pit road. On the restart on Lap 98, Jones was followed by Hemric, Justin Allgaier and Allmendinger.

On Lap 107, Myatt Snider, who was involved in an incident earlier in the race, pit under green for additional repairs.

Hemric got around Jones in Turn 4 on Lap 119 to return to the lead. Cindric, who went a lap down early in the race, had rebounded to fourth with 80 laps to go in the race.

On Lap 139, Allmendinger was able to run down Hemric for the first time in the race as both navigated lapped traffic.

A round of green-flag pit stops kicked off on Lap 146 with teams taking on new tires and fuel to make it to the finish of the race.

Jeb Burton was penalized during his stop for removing equipment from his pit stall and was forced to serve a pass-through penalty.

Once the cycle of stops was completed on Lap 155, Allmendinger cycled back to the lead followed by Hemric and Cindric.

With 35 laps remaining in the race, Allmendinger held a nearly 2-second advantage over Hemric. Jones ran third, Cindric fourth and Harrison Burton rounded out the top-five.

Harrison Burton spun in Turn 1 on Lap 174 after contact from Cindric to bring out the seventh caution of the race.

Most of the lead-lap cars pit with Hemric the first off pit road. Ty Dillon stayed out and inherited the lead. When the race returned to green on Lap 180, Dillon was followed by Hemric, Allmendinger, Jones and Annett.

With Dillon without new tires, Hemric easily made his way around him and into the lead.

On Lap 182, Dillon drifted up the track and into Brett Moffitt, who slammed into the wall. The incident also collected Garrett Smithley, David Starr and Alex Labbe.

Most of the lead-lap cars elected not to pit and Hemric remained in the lead on the restart on Lap 188.

By Turn 3 after the restart, Allmendinger had powered around Hemric to retake the lead.

With five laps to go, Allmendinger’s lead over Hemric had grown to over a second.

Hemric remained out front despite a late charge by Allmendinger to take the Stage 2 victory – his first stage win since the 2018 season.

Allgaier was third, Jones fourth and Moffitt rounded out the top-five.

Following the break between Stages 1 and 2, the lead-lap cars all pit with Hemric the first off pit road. On the restart on Lap 53, Hemric was followed by Cindric, Haley and Allgaier.

Austin Cindric fell off the pace on Lap 56 with a flat tire and while he limped around the track Riley Herbst, Ty Dillon and Michael Annett wrecked off Turn 1 to bring out the caution.

“It just sucks. People spin in front of you – it’s happened three weeks in a row,” Herbst said. “Something’s got to change, it’s an absolute shame.”

Hemric remained the leader on the restart on Lap 63.

Ryan Sieg spun off Turn 4 on Lap 64 to bring the caution back out. Hemric and Allgaier remained locked in the front row when the race restarted on Lap 70.

Haley spun in Turn 3 on Lap 72 to bring out a caution although Haley was quick to keep the car off the wall.

The race resumed on Lap 77 with Hemric still in command, Allgaier second and Jones third.

With 10 laps to go in the second stage, Hemric maintained a small but steady lead over Allgaier with Allmendinger third and Jones fourth.

Cindric held off a fast-approaching Haley to take the Stage 1 win.

Hemric finished third, Allmendinger was fourth and Jones rounded out the top-five.

Snider started on the pole but Hemric went three-wide off Turn 4 on Lap 1 to take the lead.

Cindric got around Hemric on Lap 2 to move into the top spot as Hemric dropped to second and Jones ran third.

On Lap 17, Stefan Parsons spun off Turn 4 and ended up stopped in the middle of pit road, which brought out a caution.

Most lead-lap cars elected to remain on track and Cindric continued to lead the way when the race restarted on Lap 26. He was followed by Hemric and Jones.

Hemric went three-wide on the restart and returned to the lead as Cindric ran second and Jones third. On Lap 29, Cindric ran down Hemric and passed him to return to the lead.

With 10 laps to go in the first stage, Cindric built a 1.2-second lead over Hemric. Haley was third, Allmendinger fourth and Jones fifth.

Jefferey Earnhardt (unapproved adjustments) and Smithley (driver change) both had to start the race from the rear of the field.