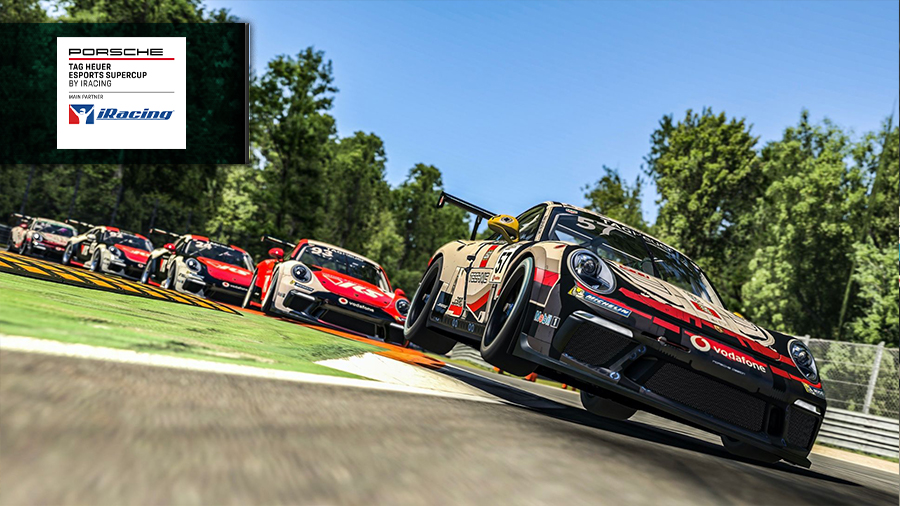 Stuttgart. On 31 July, the qualifying series for the 2022 Porsche TAG Heuer Esports Supercup (PESC) gets underway. Starting from now, sim racers around the world can secure one of the 15 free starting places in the fiercely contested championship. The global Esports championship takes off into its fourth season next January. The new qualification format is open for all iRacing members – which means, anyone who is registered on the iRacing simulation platform is eligible to take part. The virtual Porsche 911 GT3 Cup serves as the digital racing car. TAG Heuer has once again signed on as title sponsor.

The programme of the PESC qualifying series initially features six preliminary heats on six different virtual racetracks. The events will be held on Saturday every week between 31 July and 4 September 2021. They include free practice and qualifying sessions as well as the decisive race over a distance of 80 kilometres. The first round will be contested on the virtual version of the Hockenheimring. Participants must then prove their driving skills on the digital Grand Prix circuits in Barcelona, Austria’s Spielberg, two venerable American tracks Road Atlanta and Long Beach as well as the Grand Prix variant of the Nürburgring. The top 15 drivers in the overall standings are classified for the next stage on the way to securing a PESC grid spot – the so-called Contender Series.

In the second qualification stage, the top 15 of the qualifying series pit themselves against the sim racers who finished this year’s Porsche TAG Heuer Esports Supercup in positions 21 to 40 in the overall rankings. The Contender Series will be held between 25 September and 30 October on the same six circuits as the previous qualifying series. In this case, fans can follow all six of the iRacing events live on Porsche’s Twitch channel (www.twitch.tv/porsche).

The racing format of the Contender Series corresponds to the Porsche TAG Heuer Esports Supercup. This means, drivers initially take part in free practice and qualifying sessions, which earns the five fastest drivers up the five additional points. This determines the grid line up for the following sprint race, for which up to 25 points are awarded. For the feature race, the top eight sim racers from the sprint event line up on the grid in reverse order – i.e. the eighth qualifier starts from pole position. The winner receives 50 points. After the six rounds of the Contender Series, the 15 best sim racers in the overall rankings are rewarded with a grid spot in the 2022 PESC. There, they go up against the top 20 drivers from the 2021 season.

The full regulations for the two-stage qualification programme of the 2022 Porsche TAG Heuer Esports Supercup can be downloaded for free on the iRacing website.

Racing calendar for the qualifying rounds of the 2022 PESC

(in brackets: Number of laps for sprint and main race)